Asda grows sales for fifth quarter in a row

Walmart-owned chain has 10 stores in the North 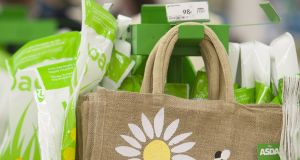 Asda has agreed a deal to merge with Sainsbury’s.

Asda, the UK’s third-largest supermarket chain and operator of 10 outlets in the North, said its same-store sales grew for a fifth consecutive quarter as it heads for a merger with Sainsbury’s, the UK’s second-largest food retailer.

It said like-for-like sales rose 0.4 per cent in the three months to the end of June. Removing the impact of Easter, which fell in the preceding fiscal quarter this year, sales grew by 2.6 per cent.

Asda chief executive Roger Burnley said the performance “shows continued momentum for 2018, and this is the first quarter we have outperformed the market since 2014.”

“We remain focused on delivering our strategic priorities and investing in the areas that matter most to our customers - innovation in our own brand, lowering prices and in continuously improving our shopping experience both in store and online.”

Asda’s momentum contrasts with that of Sainsbury’s, whose food sales growth has been the slowest of the big four grocers in recent quarters. The two companies announced a merger in April, which will see Asda’s current owner Walmart retain a 42 per cent stake in the combined business. The Competition and Markets Authority is likely to start its formal investigation into the transaction in the coming weeks, and Sainsbury’s reports its half-year results in November.

Walmart on Thursday unveiled the strongest growth in a key sales metric in more than a decade and said its US online division accelerated in the second quarter, sparking a sharp rally in its share price.

The Arkansas-based retailer said comparable store sales in the US rose 4.5 per cent — the strongest growth in more than 10 years driven by grocery, clothing and seasonal items — supported by warmer weather and traffic growth of more than 2 per cent in stores. – Copyright The Financial Times Limited 2018

1 Abtran challenges award of €63m contract by Irish Water to rival company
2 Pilita Clark: When a rude boss keeps you waiting, why not walk out?
3 Money matters: ‘My father embarrassed us with his haggling’
4 US threatens retaliation against EU over proposed carbon tax
5 Airbus poised for deal with regulators to settle corruption probes
6 Are there annual limits on inheritances or gifts to a child?
7 Ryanair to pay portion of Peter Bellew’s legal costs, court rules
8 High costs and low returns will fuel nursing home shortage - CBRE
9 Little strategic thinking in election manifestos of Fine Gael and Fianna Fáil
10 Cost of building a new family home rose 7.5% in past year
Real news has value SUBSCRIBE