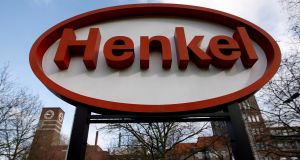 Henkel’s shares, which had gradually recovered since the firm reported delivery problems in North America in March, were indicated down 3.3 per cent in pre-market trade at brokerage Lang & Schwarz.

The maker of Persil detergent and Loctite adhesives said group sales rose 3.5 per cent to €5.143 billion, stripping out acquisitions and a hit from currencies, just above average analyst forecasts.

But earnings per share rose just 2 per cent to €1.58, missing average analyst forecasts for €1.61, as it said headwinds increased from currencies and raw material prices.

Henkel confirmed its 2018 guidance for organic sales growth between 2 and 4 per cent, but said it now expects adjusted EPS to rise between 3 and 6 per cent, down from a previous 5 and 8 per cent.

German rival Beiersdorf last week lifted its underlying sales growth forecast to 5 per cent for 2018 as a hot summer boosted demand for its Nivea skincare range.

The hit from currencies lowered Henkel’s reported sales by about €310 million, or 6.1 per cent, chief executive Hans van Bylen said, adding that without the currency impact, operational EPS was up 7.7 per cent.

Almost two thirds of the currency impact came from weaker currencies in emerging markets like Turkey, Mexico and Russia, Henkel said, while it suffered a lesser impact from the US dollar in the second quarter than in the first.

Henkel said its North America consumer goods business was back to normal after it recovered from delivery problems.

The adhesives unit, which accounts for about half of sales and provides glue to makers of appliances, electronics and packaging, saw organic sales growth accelerate to 5.2 per cent.

Henkel said it now expects the unit to record organic sales growth for the year of 4 to 5 per cent, up from 2 to 4 per cent.