Homebase to close three of its 11 Irish stores 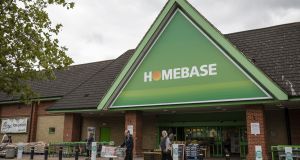 Homebase plans to close three of its 11 Irish stores as part of a wider plan to close 42 of its 241 stores in Britain and Ireland.

It also plans to cut as many as 1,500 jobs as the struggling home-improvement chain seeks to shore up performance. The retailer plans to close the stores by early 2019 under a company voluntary arrangement (CVA), according to a statement on Tuesday.

The CVA is a British court process sometimes used to allow insolvent firms to reach agreements with creditors.

Another casualty of the UK’s demanding retail sector, Homebase has suffered from a reduction in customer spending and confidence. Australian home-improvement company Wesfarmers purchased the chain for £340 million in 2016, but the business lost more than £600 million over two years. Restructuring company Hilco Capital LP bought the group for a pound sterling in May.

“The reality is we need to continue to take decisive action to address the underperformance of the business, and deal with the burden of our cost base, as well as to protect thousands of jobs,” said Damian McGloughlin, chief executive of Homebase, in the statement.

The company said it currently employs about 11,000 people, and would try to redeploy employees within the business where possible.

CVAs are becoming a more frequent occurrence on the UK high street, with Homebase becoming another in a list of retailers using the process to close outlets. Fashion retailer New Look, baby and children’s wear chain Mothercare and floor-coverings seller Carpetright have turned to CVAs as they have closed dozens of stores.

Turnaround specialist Alvarez and Marsal will handle the CVA for Homebase, and has consulted with the property owners, according to the statement.

A group of landlords challenged House of Fraser last month after the department store chain proposed closing half of its stores. Mike Ashley’s Sports Direct International, which agreed on Friday to buy House of Fraser for £90 million, said it plans to keep 80 per cent of that chain’s stores open. – Additional reporting: Reuters