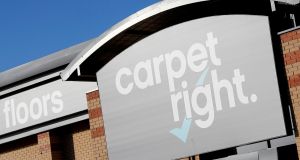 Carpetright has earmarked 81 stores for closure as part of the restructure, with rent on another 113 set to be slashed.

Carpetright has said it will book annual losses of up to £9 million after the struggling retailer’s shareholders rubber-stamped a mass store closure programme.

The group said on Monday that it expects a full-year underlying pre-tax loss of between £7 million and £9 million, which compares with a £14.4 million profit last year.

It comes as investors approved its Company Voluntary Arrangement (CVA), a process that will allow it to shut loss-making outlets and secure rent reductions.

Last week the company secured the backing of creditors and landlords for the CVA and attention will now be turned to efforts for an equity fundraising.

Carpetright is attempting to raise around £60 million through a rights issue to put the company on a firmer financial footing.

Chief executive Wilf Walsh said: “The CVA proposal will enable us to take the tough but necessary actions needed to restore our profitability.

“Having now received approval from both shareholders and creditors, we will press ahead with our plans for the proposed equity financing to recapitalise the business and enable Carpetright to address the competitive threat from a position of strength.”

Shares were down 4 per cent in afternoon trade.

The group also bemoaned difficult trading in the final quarter, which saw like-for-like sales plummet 10.5 per cent. For the full year, comparable sales dipped 3.6 per cent.

The retail sector has already seen thousands of jobs axed following the collapse of well-known names Toys R Us and Maplin.

High street retailers have been hit by a drop in consumer spending, soaring costs and the increasing threat of online competitors. – PA