Retailers together would have combined 31.4% of UK grocery market, ahead of Tesco’s 27.6% 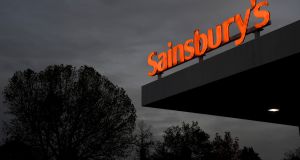 Sainsbury’s, Britain’s second largest supermarket chain, and Asda, the third largest player, are understood to be closing in on a merger deal. Photograph: Toby Melville/Reuters.

Sainsbury’s, Britain’s second largest supermarket chain, and Asda, the third largest player, are understood to be closing in on a merger deal.

The deal would be worth £10 billion and could be announced as early as Monday. Should the two merge, together they would have a bigger share in the UK grocery market than Tesco.

Asda is owned by the world’s largest supermarket retailer Walmart. One option said to be under discussion would see Sainsbury’s absorbing Asda stores, with Walmart taking a sizeable stake in the combined group.

“Sainsbury’s confirms that it and Walmart Inc. are in advanced discussions regarding a combination of the Sainsbury’s and Asda businesses. A further announcement will be made at 7am on Monday.”

The latest statistics show that Tesco has a 27.6 per cent market share, while Sainsbury’s has 15.8 per cent and Asda has 15.6 per cent. Together, they would move ahead of Tesco, with 31.4 per cent of the market.

The merger would have to be approved by the Competition and Markets Authority (CMA), because of the scale of the two retailers.

There is promise, however, that a deal could be approved after the CMA’s decision to allow Tesco to take over Booker, the UK’s largest food wholesaler in a deal worth £3.7 billion.

This would not be the first time Sainsbury’s has acquired another high street giant. In April 2016, it announced a £1.4 billion takeover of Argos, which led to better than expected results the following Christmas.

The traditional high street has come under increasing pressure in recent years, with the growth in online retailers.

Sainsbury’s and Asda have also been squeezed by the rise of lower-cost supermarkets Aldi and Lidl, who between them have a 12.6 per cent grocery market share in the UK. - PA/Reuters