Applegreen may tap shareholders to drive UK, US expansion 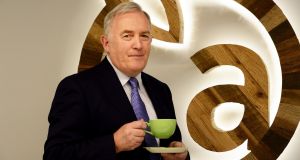 Applegreen is more likely to turn to shareholders for cash to finance a deal in the UK or US in the coming years than see its two founders sell further stock in the petrol forecourt retailer, according to the company’s chief executive.

Bob Etchingham and his chief operations officer, Joe Barrett, have sold almost €49 million of stock between Applegreen’s initial public offering in June 2015 and the placement of a further stake last September. Mr Etchingham currently owns 44.9 per cent of the company, which has a €395 million market capitalisation, while Mr Barrett owns almost 15 per cent.

“We’re not going to do anything for the next two to three years,” said Mr Etchingham (63), when asked in an interview this week with The Irish Times whether the executives planned further stake sales. The September placement was carried out to increase the amount of tradable shares, as “we had a problem in that the market generally felt there wasn’t sufficient liquidity in the stock.”

He said that the “most likely” event to cut the stake of the two executives would be an equity raise to fund “a transaction of some sort”.

On Tuesday, Applegreen reported that its gross profits surged by 16 per cent to €145.8 million, driven by food sales as Irish like-for-like fuel profits dropped amid rising global oil prices.

“We generate a lot of cash at the moment. We can continue to do what we’re doing for quite a while without needing to raise equity, especially as we have borrowing capacity,” Mr Etchingham said. “If we are doing something significant like building out a few motorway sites in the UK, that might require us to raise some equity –- or if one of opportunities we are looking at [in the US] were to give us the sort of returns we aspire to.”

The company has applied for planning permission to develop four motorway service areas (MSA) in the UK and is also seeking to develop a number of trunk road service areas, which are halfway between filling stations and MSAs. While Mr Etchingham said British customers were nervous in the run up to the Brexit vote, sales subsequently picked up.

The company is also “actively exploring” a number of opportunities to increase its foothold in the US market, where it had 11 sites at the end of December. Last year, the company signed an agreement to lease nine sites in New England from CrossAmerica Partners, a New York-listed fuel distributor. It also set up a franchise agreement in the market with convenience store operator 7-Eleven.

Merrion Capital analyst Dylan Simmonds in a note to clients on Tuesday said: “We would anticipate some sort of acquisition over the next 12-24 months in the US if management intend to sustainably grow the business.”