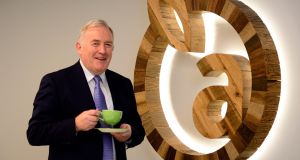 Bob Etchingham, ceo Applegreen, he founded the business in 1992 with one station in Ballyfermot. Photograph: Cyril Byrne

Applegreen knew just how to make a splash when it emerged seven weeks ago that its service station on the M1 in Lusk sold the golden ticket behind a €88.5 million Euromillions win.

The State’s second-largest forecourt retailer cut fuel prices to 88.5 cent a litre at the station – triggering a long queue that spilled onto the motorway. The National Roads Authority, which awarded Applegreen the licence to run the station, ultimately killed the party and ordered that the plug be pulled on the celebratory discount.

“I was away at the time,” said Bob Etchingham, chief executive of the 25-year-old company which he has run pretty much from the outset with chief operations officer, Joe Barrett. “I think the idea behind the promotion was Joe’s. If I was here, I’d probably have said no.”

Described as “chalk and cheese” by people who know them, the combination of Etchingham’s background in fuels and his reserved demeanour together with Barrett’s retail and marketing flare – he previously worked with Tesco and John West Foods – has developed a company with a market value of almost €390 million.

Etchingham (63), a Wexford native, founded the business in 1992 with one station in Ballyfermot in west Dublin, having spent the previous decade working for Esso. Barrett joined him the following year.

The group’s network now spans 255 forecourt sites, employing 3,400 people, across Ireland, Britain and the US.

Applegreen, which sold €92 million of shares in an initial public offering (IPO) in June 2015, including €21.7 million of stock placed by Etchingham and Barrett (50), declared its maiden dividend this week as it unveiled a 16 per cent increase in gross profit for 2016, to €145.8 million. The payout will cost the company just €1 million.

And Applegreen has warned investors not to expect massive dividends in the foreseeable future, noting that the company is still in growth mode, eyeing motorway service area contracts in the UK and “opportunities” in its fledgling US business.

Etchingham insists he had no “grand strategy” back in the early 1990s to build a business that would ultimately float, giving the Irish Stock Exchange its first pure retail stock since Arnotts, the department story, was taken private in 2003. Etchingham’s 44.9 per cent stake is worth about €175 million, while Barrett’s 14.9 per cent holding has a €58.2 million market value.

“I supposed at the time I had a bit of a midlife crisis and I was deciding what I was going to do for the rest of my career,” Etchingham says, speaking in the sparse boardroom of the company’s Park West Business Park headquarters beside the M50 in west Dublin. “I knew I had this entrepreneurial gene which meant that I had to get out and do something for myself.”

Progress was slow during the 1990s, as the company – then called Petrogas – opened about two or three stations a year, always branded under the oil company that it had supply contracts with, while Etchingham and Barrett focused on developing the shop side of the business.

“In the early 2000s, we saw that some things were starting to change. Tesco was coming into the Irish market, fuel was getting more competitive, margins were getting thinner and thinner and we really had to decide what sort of business we were going to be running in the future. We really saw food as the future.”

The big step came in 2005 when the business was rebranded as Applegreen and focused on a strategy of matching the lowest fuel prices around and luring customers into its bright and clean shops and ultimately convincing them to have a Subway sandwich, Burger King meal, or, more recently, noodles from a Chopstix bar in one of its stores.

“People are very, very sensitive to fuel prices and will happily drive down the road to save a cent a litre. And while they’re there, they’ll spend money in the store if the ambiance and everything else looks right,” said Etchingham. “People need to be confident about having their lunch in a petrol station. If you go back 10 or 15 years, ago, they didn’t have that trust. I think we’ve managed to bring people along with us and it’s been very successful for us.”

Roadside retailing may not be glamorous, but it’s profitable.

Irish consumers are now back in full flight, following the economic crisis, with like-for-like food and store gross profit in the Republic rising by more than 10 per cent last year, even as fuel profits fell by almost 5 per cent as the company struggled with surging oil prices and a higher fuel loyalty card volumes.

Although loyalty card business has even tighter margins, it commands customer loyalty and pulls punters into its stores.

The latest figures from the Central Statistics Office show that retail sales were rising at an annual 2.6 per cent rate in January. The resurgence of Irish consumers from the downturn showed up in official data in 2014 but Etchingham reckons he saw the first signs of life the previous year as Ireland was at the tail end of its €67.5 billion international bailout programme.

“The first category we noticed growth in was coffee in 2013. Maybe people just got tired of austerity and decided to treat themselves to a cup of coffee in the morning.”

It took longer for that to trickle down to other areas of the business even as the number of cars taking to the roads increased as more and more people came off the dole queues and found work.

“That general widespread uplift in like-for-like sales really only happened for us in the second half of 2015. It has continued since then. Consumer sentiment is much better, people are willing to spend again, construction is coming back – and they’re good customers of ours.”

The Irish network grew by 22 locations last year – comprising 15 dealer sites and the opening of trunk road service areas, which are midway between normal filling stations and what Etchingham calls the “battleship” motorway service areas – to 155. The company has a 17-18 per cent share of the motor fuel market, about half that of Topaz, which was bought by Canada’s Couche-Tard a year ago.

“The Irish story really will continue for a few more years, but ultimately the growth will have to come from somewhere else,” says Etchingham.

Applegreen currently has 77 sites in the UK – a market it first entered in 2008 and where fuel sales are dominated by supermarket chains. It added 15 locations there last year, including a motorway service area south of Belfast. The company has applied for planning permission for four more motorway service areas and is also seeking to develop a number of the smaller trunk road service areas in the UK.

Applegreen is sticking to the tried and tested route in the UK of buying individual sites rather than packages of locations. Large sales have sparked something of a bidding frenzy among private equity firms such as Lone Star and Clayton Dubilier & Rice in recent years as major oil companies retreat and concentrate increasingly on their upstream exploration and production projects.

“We bottom-feed and we buy single sites from ‘mom and pop’ operations,” said Etchingham. “We will look at bigger packages, but almost inevitably in the UK, we don’t feel that we’ll be there at the end of the day.”

While the company has also taken a tentative approach to the US market where it made its first foray in 2014 – opening two sites on Long Island – Etchingham hints that the company may now be prepared to take a bolder approach there.

Last year it signed an agreement to lease nine sites in New England from CrossAmerica Partners, the New York-listed fuel distributor. It also set up a franchise agreement in the US with 7-Eleven, the convenience store operator.

Why the US in the first place, rather than looking elsewhere on this side of the Atlantic?

“We had a lot of contact with industry in the US . . . and felt it was going to be an easier market to penetrate than some markets in continental Europe,” said Etchingham. “We’ve spent almost three years learning about the business in the US, learning about the consumer there and how the Applegreen model will translate into that market.

“We talk about the US as if it’s one market. It’s not really. It varies. There are all sorts of regulations in different states. In New Jersey, you can’t have a self-service station. In Pennsylvania you can’t serve alcohol. Massachusetts has a flat margin on cigarettes and even if you take Long Island, each townland has its own planning rules. You have to learn a lot when you move into an area.”

Applegreen made a “small profit” last year in the US and Etchingham believes that it will be offered “parcels of stations” in the northeast of the country – spanning New Hampshire to New Jersey – from companies it is building relationships with, without being forced into competitive bidding with private equity companies or large independent fuel retailers.

“The opportunities are out there and we’ll be exploring them.”

Looking more broadly at the future of fuel retailing, Etchingham says he doesn’t see the advent of the electric car or hybrid vehicles posing a big threat until at least 2020.

“It’s probably seven to 10 years away from really significantly impacting our business. It depends on how things play out. A lot of people would regard hydrogen as being the most viable alternative and, in that case, you’ll still need your petrol stations to fuel your hydrogen cell.”

Research firm IHS Automotive estimates that battery-powered and plug-in hybrid vehicles will make up about 8 per cent of the global car market by 2025 “but we see ourselves not as petrol stations, we see ourselves and convenience retailers and fuel is just one of our products”.

Etchingham may have started out as a dyed in the wool oil man, but he’s now an unashamed purveyor of coffee, breakfast rolls and TV dinners.

“I just morphed into a convenience retailer without my noticing it.”