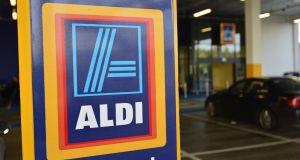 German retailer Aldi is to created 400 new jobs in the Republic.

Aldi Ireland is to recruit 400 new staff and raise its minimum pay rate to €11.50 an hour, equivalent to the living- wage threshold.

The move comes on foot of what the retailer said was sustained sales growth and store expansion in the Republic.

The German discounter said it plans to recruit and train more than 400 new staff during 2016 to support its ongoing Irish expansion drive.

The announcement comes ahead of the opening of its 121st and 122nd Irish stores next month. It plans to open a further seven next year.

According to the latest Kantar Worldpanel figures, it now has a 9 per cent share of the Irish grocery market.

Aldi Ireland has also become the latest big-name retailer to sign up to the living wage campaign, pledging to pay staff a minimum of €11.50 an hour from next February.

The rate is a third more than the statutory minimum wage, which is currently €8.65 an hour.

This is due to rise to €9.15 from January as a result of changes announced in the budget.

Aldi already pays store assistants a minimum of €11 an hour, significantly more than most of its Irish rivals.

“We are committed to offering the best pay and benefits in the industry,” Aldi chief executive Matthew Barnes told The Irish Times.

“The success of Aldi in Ireland has been driven by the commitment, hard work and ambition of our employees and we will continue to maintain our leading position on pay,” he said.

The living wage campaigns here and elsewhere are gaining greater political traction with as many as one in five workers earning less than the prescribed rates.

The living wage is defined as the minimum pay workers need to meet their needs for housing, utilities, transport, healthcare, clothing and food.