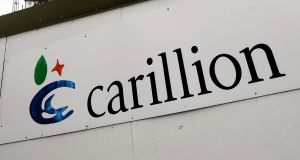 Carillion has said it must raise £125 million from disposals over the next 12 months.

UK contractor Carillion is in talks with a host of Middle Eastern construction companies to sell a chunk of its overseas business as it embarks on a radical cost-cutting and disposal plan aimed at salvaging the stricken company.

It faces a crunch week, as its auditors at KPMG determine whether it can continue operating ahead of the delayed publication of first-half profits next Friday.

Carillion’s position is particularly sensitive as it is one of the UK government’s biggest contractors – and Whitehall would be reluctant to see such a high-profile collapse as it wrestles with Britain’s decision to leave the European Union. So far the group has benefited from the support of ministers, who have awarded it substantial work in recent months.

In July, Carillion revealed its profits would be £845 million (€957 million) lower than expected, ousted its chief executive, Richard Howson, and axed its dividend. Its management has insisted it has enough cash until December 31st but the company has reported that net debt soared to £695 million by the end of the first half – and is on course to reach £800 million by the end of 2017.

To add to the problems, Carillion is battling with a pension deficit of more than £650 million – larger than that of the collapsed UK retailer BHS, which lumbered the government’s pension protection fund with a £571 million shortfall.

Carillon’s share price has dropped 80 per cent since the profit warning in July and it continues to be the most shorted stock in the UK, indicating that hedge funds are betting on further falls. With an unstable shareholder register and no large investors, the company has struggled to secure support for an equity raising issue, according to people briefed on the process. The contractor is valued at less than £200 million – compared with a peak of about £1.7 billion in 2011, making it almost impossible to call on investors for the £500 million equity injection analysts estimate it urgently needs.

Carillion declined to comment. Management, led by interim chief executive Keith Cochrane, is hoping that a sale of the Middle Eastern operations in Oman, Qatar, Egypt and Saudi Arabia will create a smaller, UK-focused business that can win back investor support in time for a rights issue later this year or early next year, said people briefed on the strategy. The aim is to stave off more dramatic options such as a debt-for-equity swap or potential collapse.

“If the cost-cutting and sales process don’t work, then the debt-for-equity swap and the pensions issue come back on the table,” said one source involved in the restructuring.

Carillion has been hit by higher-than-expected costs on projects in the UK and in the Middle East, where, like many companies, it has suffered delays to contracts. Not only were profits overstated on some projects but it faces delays to money owed on others. Rising materials and labour costs have also hit the group.

Almost all of the losses have come from the building arm, which suffered a squeeze on contracts and margins after the financial crisis.

Although KPMG has reviewed 75 per cent of the company’s contracts, an announcement on the remaining quarter is expected next Friday, with some analysts speculating that its troubles may have spread from construction to the support services division.

Too big to fail

However, many analysts believe Carillion – with £5 billion in annual revenues – is too big to fail and that lenders, bondholders and shareholders will fight hard to prevent their interests being liquidated.

The government needs British contractors to help deliver key infrastructure projects such as London’s new super sewer and Hinkley Point. In a sign of its support for the business, Carillion has won two facilities management deals worth £158 million for the ministry of defence as well as a share of £1.4 billion work on the new High Speed Two railway line since the profit warning.

Central to plans to rescue the business now is the hiring of a new chief executive who can bring a City following in the vein of Rupert Soames, who joined Serco from the power generation company Aggreko; or Leo Quinn, who left Qinetiq to salvage construction rival Balfour Beatty. But despite a management clean-up last week aimed at giving Carillion a fresh start, headhunters have yet to secure an appointment.

“They need to find a chief executive before they can raise equity,” said the person involved in the restructuring. “It needs to be a name that will be attractive to investors.”

Carillion has announced 250 voluntary redundancies and hundreds more are expected over the next few months. Like many of its industry rivals, the group had embarked on an ambitious acquisition spree in recent years – including a failed bid for Balfour Beatty three years ago – that had been poorly integrated leaving duplicate management and administration staff.

‘Not a fire sale’

Its Canadian business and its public/private partnerships divisions are also on the block, although management has said it is “not a fire sale,” according to sources close to the process. They added that the PPP business in particular was attracting offers.

Carillion has said it must raise £125 million from disposals over the next 12 months, which would include the sale of the Middle Eastern and Canadian business. In July it said it had raised £12.8 million from the sale of its business in Oman Carillon Alawi to Alawi Partnership.

But there is still considerable uncertainty over the extent of the problems.

Although the government’s support has staved off an exodus of customers and suppliers, Rudi Klein, chief executive of the Specialist Engineers Contracting Group, said members had complained that the company had slowed payments to subcontractors. Rivals have also reported an influx of CVs as Carillion’s staff take fright.

Stephen Rawlinson, an analyst at Applied Value, said it was a “race against time” for the business but believed it would get through its current difficulties. But analysts at UBS pointed to the “thin” equity value and said they “struggle[d] to see Carillion executing on a turnround”. – (Copyright The Financial Times Limited 2017)

1 Why are markets booming when a crash is on the way?
2 Your old car could be telling others all your personal data
3 Permission sought for €150m film and media campus in Wicklow
4 Drink tax row; no respite for Bewley’s; and mortgage U-turn at AIB
5 AIB U-turn on mortgage block for those on Covid wage subsidy
6 Covid-19: Publicans and restaurateurs row over calls for VAT cuts
7 Staff at Bewley’s cafe on Grafton Street are made redundant
8 Government committed to finalising roadmap for safe overseas travel ‘shortly’
9 Dunnes Stores trials online ordering from Cornelscourt outlet
10 No free lunch on coronavirus cash payments
Real news has value SUBSCRIBE