Quinnbet: the only enterprise Sean Quinn known to have left

As well as providing for bets on races and sports fixtures, the Quinnbet website also has a ‘Quinncasino’ and a ‘Quinnlotto’ section 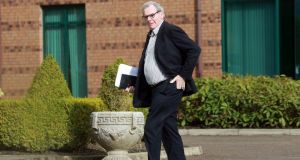 He has gone from billionaire to bankrupt, and from being one of Ireland’s most below-the-radar tycoons to being one of the most controversial and talked about people in the nation’s news media.

Now 70, Seán Quinn, the man who used a humble family farm on the Cavan/Fermanagh border as a springboard to enormous riches, has obviously found it difficult to accept that his appetite for risk is the cause of him losing everything.

It may be fitting, then, that the only commercial enterprise Quinn is still known to be involved with is an online betting platform Quinnbet. Set up two years ago, company office filings show a series of developments in the business in May of this year, with changes in shareholdings and new directors coming on board.

One of the new directors, 62-year-old London-based businessman Val Flynn had dealings in the past with Quinn in relation to fundraising projects, The Irish Times has learned.

Flynn is a former shareholder in Shannon-based aircraft leasing operation Aldus Aviation Ltd, which was bought in 2016 by Nordic Aviation Capital. He has a background in raising finance, and worked with Quinn when the businessman was seeking funding for his first cement factory in the 1980s in Derrylin, Co Fermanagh.

Before Quinn emerged from bankruptcy in 2015, Flynn had discussions with him in relation to possible investment in some of the Derrylin businesses that had belonged to Quinn until they were seized by Anglo Irish Bank in 2011.

It is understood the discussions involved potential deals for Quinn Glass and a wind farm, as well as separate later contacts about a change in the ownership of Quinn Industrial Holdings. None of the discussed projects or investments ever materialised.

Belbridge Consultancy Ltd, which owns the Quinnbet name, was incorporated in June 2016, a year and a half after Quinn emerged from his three-year period of bankruptcy.

“It was a surprise when Quinnbet launched their site, but they have taken the route most smaller operators have taken to start off, using a white label, “said Sharon Byrne, chair of the Irish Bookmakers Association. “This should provide them with the range of experience needed to try survive in our sector.”

Quinnbet is not a member of the association.

White label online gambling businesses are websites that are in fact run by specialist companies that provide the odds and take the bets. In the case of Quinnbet, the betting is actually handled by a company in London.

Why Flynn has joined the board of the two Irish companies associated with Quinnbet – Belbridge and Quinnb Sports Ltd – and whether it reflects plans about new funding for the business is not known. A request for a comment from the business met with no response, and Flynn could not be contacted.

Quinnbet’s website platform is provided by London-based FSB Technology (UK), which is licensed by the (British) Gambling Commission.

The Quinnbet sportsbook is licensed in Ireland by FSB and regulated by the Revenue Commissioners, according to the Quinnbet website.

As well as providing for bets on races and sports fixtures, the Quinnbet website also has a “Quinncasino” and a “Quinnlotto” section.

The latter is an operation run by Gibraltar-based EU Lotto Ltd. It is not itself a lotto, but allows people bet on the outcomes of lotteries such as the Irish Lotto, the Euromillions Lotto, and the high-value US PowerBall and MegaMillions draws.

EU Lotto, which trades internationally under the name Lottoland, has a remote bookmakers licence from the Revenue Commissioners.

Lottoland’s business model has been criticised for a number of reasons, including the fact that it diverts money from the actual lotteries, many of which give sizeable proportions of their income to charity.

According the Gambling Commission’s website, FSB is licensed to provide white label services to 12 websites, including Quinnbet, Toals and Jenningsbet. Most are small operators. The website also lists 21 former white label websites for which FSB formerly provided services, none of which are related to Quinnbet.

In August the commission announced that it was launching a review of FSB’s licence under its powers governing suspected breaches of licence conditions.

A spokesman for the commission would not comment further, and a request for a comment from FSB met with no response.

In August FSB suspended the operation of a white label partner called Blackbet, which targeted the Nigerian market.

Belbridge, based in the Connell Building, Ballyconnell, Co Cavan, owns the business names Quinnbet, Quinnsports, and Quinncasino, and is in turn 100 per cent owned by Seán Quinn.

It was the owner of Quinnb Sports Ltd, of the same address, but as of May last that company is owned directly by Quinn, one of his daughters Brenda Quinn, and the children of Seán Quinn junior. Quinn senior’s shares are non-voting shares.

Belbridge has a remote bookmakers licence from the Revenue Commissioners. Such licences last for two years, cost €10,000, and were renewed in August of this year.

Why the company has the licence is not clear. A source in the industry said such a licence was not needed by white label businesses. It could be that Quinnbet is, or was, contemplating operating on its own, the source said.

The Revenue website shows that Belbridge directors Stephen Kelly and Denis Kelly are the nominees associated with the licence. Nominees need to get a personal fitness certificate from a local Garda superintendent.

The Gambling Commission website lists Belbridge as having a pending licence application with it in relation to the Quinnbet site. It does not say when the application was lodged.

It is FSB, rather than Belbridge, which is the licensed operator in the Republic and in Britain.

The situation is Northern Ireland is unclear. The Gambling Commission is the regulator in Great Britain, rather than the UK.

“The order has not kept pace with industry and technological changes, and it contains no provisions which relate to online gambling. However, as a result of the 2014 Gambling (Licensing and Advertising) Act, it is an offence for an online gambling operator to advertise to Northern Ireland consumers unless they hold the appropriate GB Gambling Commission licence and comply with their codes of practice.”

The white label business model usually involves FSB getting approximately 30 per cent of revenue, plus expenses, with the partner being responsible for marketing its site and driving customers towards it, the industry source said.

FSB would buy the odds that appear on the site from suppliers, who sell such services, the source said.

The filed accounts for Belbridge and Quinnb Sports are abridged, and give no information as to turnover or profitability. Last year Quinn senior said in a media interview that the business had made a profit in its first six months. The accounts do not indicate a substantial commercial operation.

Most of the early directors involved with the Quinnbet venture were involved in a long-running dispute with the Irish Bank Resolution Corporation (IBRC) called the conspiracy case.

Stephen Kelly, the husband of Aoife Quinn, was one of the defendants in the case taken by the IBRC in 2011. Quinn senior was also a defendant, along with all of his children.

In the case the State-owned bank, which took over Anglo Irish Bank and Irish Nationwide after they collapsed, accused the defendants of being part of a scheme to prevent it exercising its legal rights over an international commercial property portfolio worth hundreds of millions of euro.

The court was told that as well as being frustrated in its efforts to assert control over the buildings, rent worth tens of millions of euro had also gone missing.

The Quinn position was that they admitted that a scheme to frustrate the bank had been put in place, having been authorised by Quinn senior, but that they had then been double-crossed by those they had asked to operate the scheme, and lost control. The IBRC said it did not accept that this was correct.

The case was settled in April of this year with a conditional €440 million judgment – or approximately €88 million each – being issued against the five adult Quinn children.

The execution of the judgments, which arise because of guarantees on Anglo loans, is stayed as long as the Quinn siblings help secure control of the property assets, including the missing rent.

Both sides agreed to meet their own legal costs. Given that the case involved multiple legal actions overseas aimed at reversing asset stripping schemes, the costs are estimated to be in the tens of millions of euro.

Another part of the settlement was that the Quinns would drop proceedings they took against the IBRC over the legality of Anglo loans totalling €2.34 billion.

It was these loans that led to Sean Quinn losing his Quinn Group, and to Anglo seeking to gain control of the international property portfolio. The loans were linked to Quinn’s ultra-high risk investment in Anglo shares by way of so-called contracts for difference or CFDs. This high-risk investment brought about not just the collapse of Quinn’s business empire, it also brought about the collapse of Anglo Irish Bank.

Seamus McMahon (37), with an address in Belturbet, Co Cavan, is a former director of Belbridge. A nephew of Quinn senior, he was mentioned during the conspiracy case proceedings.

In correspondence between the two sides in 2012, the defendants admitted that their legal fees were being met by €1.5 million in “salaries” that came from the international property group over which, a year earlier, a receiver had been appointed to help IBRC assert its rights.

In 2015 the IBRC found out that Quinn junior, whose finances were being overseen by the court, was in receipt of a salary from a Belturbet company called SMC Products Ltd.

The court was told that the company was owned by Seamus McMahon, and that he and Quinn senior were directors of the company, along with Quinn’s niece Yvonne Fitzpatrick.

It subsequently emerged that all of the Quinn children and their spouses, save Ciara Quinn, were in receipt of salaries from SMC. No contracts of employment were ever produced, and it was not made clear what the money was being paid for, IBRC told the court.

Company filings for SMC show that it is now owned by Quinn senior. It produces abridged accounts, and it is not clear what business it is involved with.

McMahon and Fitzpatrick stood down as directors of SMC in 2017, and Stephen Kelly joined his father-in-law on the board.

The effort of the IBRC, which is now in liquidation, to gain control over the international properties and find the missing rent has made significant progress but is not complete.