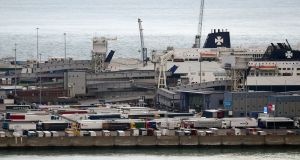 Lorries bound for Europe at Dover Port in Kent: 53 per cent of Irish goods exports with the rest of the world, not including Britain, pass through the UK in terms of volume. Photograph: Gareth Fuller/PA

Potential post-Brexit restrictions on Irish freight passing through the UK will be eased after Britain signed up to an international agreement covering fast-tracked transit through third countries.

The UK government said on Tuesday it would remain in the long-standing Common Transit Convention following its exit from the EU on March 2019 after successfully negotiating membership as a non-EU member.

Currently a member of the convention as an EU member, the UK’s membership as a standalone country will simplify cross-border trade for Irish businesses using the UK “landbridge” to access continental Europe.

Transporting goods across the UK between Ireland and the Europe is, for many Irish importers and exporters, the fastest and cheapest way to reach lucrative EU markets and a longstanding part of critical supply chains.

Two-thirds of Irish goods exporters use the landbridge, connecting Ireland and Europe through British ports such as Holyhead and Dover, according to the Irish Exporters’ Association. Some 53 per cent of Irish goods exports with the rest of the world, not including Britain, pass through the UK in terms of volume.

The agreement reduces administrative burdens on traders by removing the need for companies to sign additional import or export declarations when passing through multiple customs territories.

“Membership of the convention will support traders under a new trade agreement with the EU or in the unlikely event of no deal,” said Mel Stride, financial secretary to the UK treasury.

Concern over the future use of the landbridge by Irish companies has increased as a result of the continued political divisions in London over the proposed EU-UK divorce deal. The agreement contains specific protections to continue unfettered Irish use of the UK landbridge in order to access EU markets.

While the convention does not cover regulatory checks on agri-food products and may not fully clear expected post-Brexit congestion at ports, the UK’s continued membership was welcomed by Irish representative groups.

Adrian Flynn, general manager of the Freight Transport Association Ireland, said that the convention would “significantly reduce the amount of red tape and any delays at the borders for Irish goods transported to the continent through the EU landbridge”.

“What is now imperative is that the UK government ensures that all necessary arrangements for use of the convention are made so that from March 30th, 2019, Irish businesses can continue to transit their goods to and from the continent with minimal delays at the borders with the UK,” he said.

Chartered Accountants Ireland said that the UK remaining in the convention would “greatly help” Irish businesses look for opportunities beyond existing British markets in the EU.

“Ireland is recognised as a world leader in the area of medicinal and pharmaceutical manufacturing. Post-Brexit customers in EU countries could look to suppliers in Ireland rather than the UK,” said Brian Keegan, director of public policy and taxation at the accountancy body.

With the 100-days-to-Brexit mark falling on Wednesday, Mr Keegan urged businesses not to downplay the problems that a no-deal Brexit would create for the economies north and south of the Border.