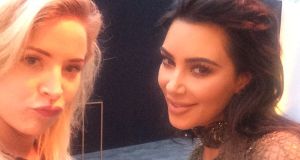 A Daily Mail journalist who was ejected from a party at the Irish embassy in London for heckling the Ambassador’s speech said she was annoyed at his suggestion of a possible second Brexit referendum.

Joanna Bell, a Daily Mail journalist who is originally from a village near Dundalk, Co Louth, was asked to leave the Embassy’s Christmas party on Monday evening after disrupting the speech given by Irish Ambassador Adrian O’Neill.

Ms Bell interrupted Mr O’Neill’s address at the festive drinks reception after he made comments intended to be humorous on the possibility of the UK’s departure from the EU being put to a second vote.

When the Ambassador spoke about the risks to the Northern Ireland peace process from Brexit and the potential for a hard border affecting Border communities, Ms Bell reportedly shouted: “Bor-ing!”

At another point, she shouted “Brexit!” before being escorted from the room at the Embassy near Westminster.

The Embassy’s “Politics & Press” party, a popular event in London’s social calendar for politicos and journalists, was attended by prominent figures from politics and the media. British chancellor Philip Hammond, Northern Ireland secretary Karen Bradley and Jonathan Stephens, permanent secretary of the Northern Ireland Office, Lord Jeffrey Archer and his wife Mary, and former UK defence secretary Michael Fallon were among the guests at the event.

One attendee said the journalist’s outburst was “totally out of sync with the people in the room” who were at the event on business, including some who were there because of the importance of the Brexit process.

Ms Bell, a former Irish customs officer, voted for the UK to remain in the EU in the Brexit referendum but describes herself now as “a staunch Brexiteer” and a “big advocate of democracy” in support of the 2016 vote.

She believes that European Commission president Jean-Claude Juncker and others in the EU have behaved in a “contemptible manner” towards UK prime minister Theresa May and this has made her switch her support.

Suggestions of a second Brexit referendum have reminded her of how Irish voters were asked to vote again on the Lisbon Treaty referendum in 2009.

Speaking to The Irish Times, Ms Bell said her "unfortunate ejection from the Embassy" followed a response to the suggestion by the Ambassador "that a second Brexit referendum should take place".

“A second referendum would have the highly unfortunate consequences for this polarised and still combustible island. It’s not that mandates should never be withdrawn or a referendum reconsidered,” she said.

“If, however, a democratic outcome is to be re-considered, it must first be respected. What could be more damaging than a second referendum if Remain wins as narrowly as it lost the first? We would find ourselves in a precarious state.”

However, witnesses at the reception insisted that the Ambassador had never said that the British "should" hold a second referendum, but rather had made a humorous remark about its future options.

Ms Bell in a statement to The Irish Times apologised unreservedly to the Ambassador and his wife for disrupting their party.

“Obviously, I profoundly regret the excessive robustness and perhaps lack of finesse with which I expressed my disagreement with the ambassador,” she said.

“I had, I confess, enjoyed a good lunch with an eccentric aristocrat who is a staunch Brexiteer.”

Ms Bell said she worked as a customs guard on the Border in Cavan, Monaghan and Louth in 2006, based out of Dundalk.

The Department of Foreign Affairs declined to comment on the incident at the Embassy.

Mr O’Neill, known for his calm and unflappable manner, is said to have noticed Ms Bell’s interjection but “handled it fairly diplomatically,” said one attendee.

In his speech, the Ambassador told guests that he was grateful for the “goodwill and friendship” the embassy has benefited from in London.

He also thanked them “for that sense of friendship towards the embassy, towards Ireland and above all towards continued warm and friendly relations between our two countries”.