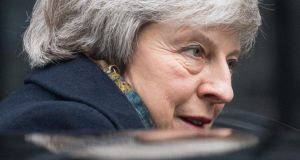 “Just because you’ve put a seatbelt on, it doesn’t mean you should crash the car.”

That, according to the numerous leaks that have marked British cabinet meetings in recent months, was how one minister summed up the acrimonious decision on Tuesday to ramp up the UK’s plans for a no-deal Brexit.

While prime minister Theresa May continues to insist that delivering the deal agreed with Brussels remains top priority, the government has decreed that emergency no-deal plans must now be implemented across Whitehall. An extra £2 billion (€2.2 billion) will be released by the treasury to help government departments.

Opponents of the prime minister accused her of “psychological warfare” by ramping up the no-deal pressure, saying she was attempting to scare MPs, businesses and the public into accepting her deal.

The announcement came after an ill-tempered cabinet meeting lasting almost three hours, as the various factions lined up to push their own preferred routes to Brexit. In another colourful turn of phrase, one of the 25 cabinet ministers who spoke at the meeting dismissed the idea of a managed no-deal Brexit as “a unicorn that needs to be slaughtered”.

When cabinet members trooped into 10 Downing Street on Tuesday morning, the paper outlining the various ways forward was deemed so sensitive that ministers were prohibited from seeing it in advance – a level of secrecy and paranoia that just about sums up the utter chaos of Brexit.

The government announcement – delivered by a spokesman via lobby journalists – was obviously designed to reassure, but, like the promise of 3,500 troops on standby, had a real air of alarm about it, as “citizens” were urged to prepare themselves and promised “more detailed advice” in the coming weeks.

Businesses were urged “to enact their own no-deal plans as they judge necessary” although there was no word on whether any financial support would be forthcoming from the government.

Ministers pointed to the 106 technical notices that have been published, and highlighted 320 “no-deal workstreams” that are ongoing across Whitehall departments.

The larger companies can afford it; I’m much more concerned about small companies which do not have the financial resources. Big companies will find a way

In the coming weeks letters will be sent out to 140,000 businesses, while 80,000 companies deemed most likely to be affected will receive emails this week with advice about no-deal planning.

A publicity campaign will be launched and the government will make available an online “partnership pack”, running to 100 pages, with further advice for companies on their no-deal preparedness.

John Allan, president of the employers’ organisation, the Confederation of British Industry, welcomed the announcement but remains frustrated by the chaos and delay in Westminster.

“We see no real sign that our politicians are striving to find a plan B if the prime minister’s deal is not approved by the House of Commons,” he said.

Allan, who is also chairman of Tesco, said larger companies would be able to cope with the costs but he fears for smaller companies. Tesco will step up its stock levels and “will be as ready as it possibly can be,” he said.

There will be a “significant financial penalty” for companies as they prepare for a no-deal, he said: “The larger companies can afford it; I’m much more concerned about small companies which do not have the financial resources. Big companies will find a way.”

He expects a series of announcements from businesses in the early weeks of next year about moving their operations out of the UK and into the European Union. The cumulative effect will, he said, be “significant”.

The mounting frustration in the business world was underlined yesterday as 53 leading executives, including former Sainsbury’s boss Justin King, called for a second referendum, dismissing May’s deal as “impossible to resuscitate”.

In a letter to the Daily Telegraph, they called on the prime minister to take her deal to the British people if she is unable to win parliament’s approval in the meaningful vote next month.

Last month Bank of England governor Mark Carney warned that “the majority” of British businesses were unprepared for a hard Brexit but larger companies at least have been implementing plans for some time, stockpiling parts, components and ingredients.

In food, demand has been so great that space is running out in frozen and chilled warehouses around the country. Leading companies such as Cadbury’s have been stocking up on ingredients, as has Premier Foods, the Mr Kipling cakes to Bisto group.

Majestic Wine is also in the process of building up a store of more than a million extra bottles of wine from France, Germany and Spain as part of its no-deal planning. In post-Brexit Britain, that might not be quite enough.