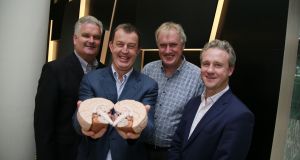 Covid-19 might be making 2020 an annus horribilis for most businesses, but it has been a year to remember for Fountain Healthcare Partners.

The venture capital business which focuses on investments in the European life sciences sector has just seen Swiss drug giant Roche acquire Inflazome, one of the companies in which it has invested from an early stage.

It comes just a month after German heavyweight Bayer paid $425 million (€361 million) – with the potential for a further $450 million to come – for another Fountain company, Kandy Therapeutics, which is working on a non-hormonal treatment of menopausal symptoms.

The €380 million upfront payment for Inflazome on its own represents a strong return for Fountain, which has its roots in Elan, once Ireland’s largest indigenous pharma business.

It is 10 times the cost per share of Fountain’s original investment in 2016 and a fourfold return on additional money invested as recently as November 2018.

And that may just be the start. Inflazome’s focus is on inhibiting a part of the body’s immune system, NLRP3, which, if overactive, is implicated in a wide range of chronic inflammatory conditions, including Alzheimer’s, Parkinson’s and multiple sclerosis. The Roche deal includes undeclared milestone payments should Inflazome’s drugs deliver on various targets.

Other companies are also developing drugs to suppress this NLRP3. One of them, IFM Tre, was bought last year by Novartis for $310 million in cash. That deal also featured milestone payments – up to $1.265 billion of them – which could raise the value of the deal fivefold to €1.575 billion.

No two deals are the same, but those figures suggest Inflazome investors could yet earn a multiple of that €380 million upfront figure, with Fountain among the biggest winners.