Will brother’s widow get half of our parents’ estate when they die? 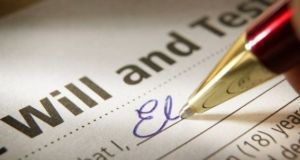 My brother married 12 years ago and passed away suddenly almost 10 years ago. His wife lives and works in Asia where she comes from. He always lived here. They never had any children.

He was my only sibling and my parents’ wills are for all assets to be split 50/50 between me and him. They haven’t changed their wills yet but want everything to go to me and ultimately my son.

Do they need to change their wills now? Will his widow be entitled to half their estate or, as their descendant, will it come to me?

They may not need to in the circumstances but they should.

In general, it is simple common sense to amend a will when the circumstances change in relation to your plans for your estate.

In this case, the plan was for a straightforward split between two children on a 50/50 basis. That made perfect sense when both were alive but it can get more complicated now that your brother has died.

The critical thing here is whether your brother had any children. You seem sure that he did not and, assuming that is true, there may be no concern. But if he did have children, with his spouse or otherwise, things could get complicated.

In the case of your parents’ wills, it appears there is no specific bequests and it is simply a case that the entire estate is treated as residue and split evenly. As a rule, if someone benefiting under residue predeceases the person giving the inheritance, the inheritance lapses. For clarity, that is the case regardless of where his widow lives.

In your brother’s case, this would mean the entire estate would default to you as the sole remaining beneficiary.

However, there is a very important exception under Irish succession law, and that relates to the position where a child predeceases their parent but has children of their own.

With no children, there is no obligation to provide for your dead brother’s spouse

In this case, anything the child was intended to receive under the parents’ wills will not die with them. But nor does it go directly to their children. Instead it goes to the estate.

In other words, if your brother had a child, the inheritances your parents intended leaving to him would go to his estate. Depending on what his own will said, that might then go on to his child/ren but it could equally pass to his spouse. That would be determined by the choices he made in drawing up his own will, assuming he did – otherwise it would be governed by the law of intestacy.

With no children, there is no obligation to provide for your dead brother’s spouse.

But, for good practice – and just in case there was a child of whom you might be unaware – if your parents really do want to ensure that you inherit their estates in full, they should just visit their solicitor and amend their wills. It’s an easy enough job and should be done quite quickly.

1 Guinness brings out a non-alcoholic version of the black stuff
2 How long can Government afford to keep State pension age at 66?
3 Google's incredible power is the result of decades of regulatory failure
4 Galway’s Aerogen plays key role in Covid-19 therapies
5 Don’t worry about the deficit – the lockdown risk is to jobs
6 Half of businesses plan to freeze pay next year
7 Farm lobby seeks EU ban on vegan ‘burger’ and veggie ‘sausage’
8 Frank Fitzgibbon stepping down as Sunday Times editor
9 How much will a Covid-19 vaccine cost?
10 Irish start-up Wayflyer raises €7.8m in seed funding
Real news has value SUBSCRIBE
Save money on international transfers