The advantages of being an ordinary investor 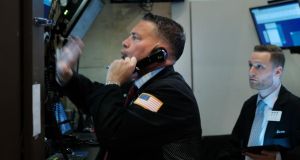 Traders work on the floor of the New York Stock Exchange. All investors can suffer from short-termism, says fund manager Joe Wiggins, “but it is easier for amateur investors to avoid it”. Photograph: Spencer Platt/Getty Images

Inside information, better tools, better connections, access to almost infinite amounts of data – it’s fair to say ordinary investors can’t compete against professional investors in so many respects. The reverse is also true, however. For all the talk about dumb money and smart money, ordinary investors have some pretty big advantages over their professional counterparts.

The pitfalls inherent in the money-management business are highlighted by the recent difficulties experienced by British fund manager Neil Woodford. Once regarded as Britain’s answer to Warren Buffett, Woodford has badly underperformed in recent years, prompting increased numbers of his investors to abandon ship as assets under management fell from more than £15 billion to less than £5 billion.

Most of those funds were invested in his flagship Equity Income Fund and, as the pace of withdrawals accelerated, Woodford was facing a fire sale of illiquid assets in order to meet redemption requests. Consequently, he temporarily closed his fund to withdrawals, a potentially career-ending move that has angered his stunned investors and prompted scrutiny from Britain’s financial regulator and MPs.

Many UK companies are “as cheap as I can ever remember”, says Woodford, who maintains every asset in his portfolio “has a fundamental value that significantly exceeds its share price”. That may (or may not) be the case, but Woodford, who has long preached the importance of taking a long-termist investing approach, has had no choice but to start selling in order to meet investors’ cash demands.

Making the case for long-termism is all very well, but contrarian fund managers such as Woodford need their investors to keep faith in them; otherwise, it’s curtains, even if they are right in the long run.

In contrast, a fund manager cannot remain focused on the long term if their holdings are plummeting and investors are demanding their money back. That’s why, as value investing icon Seth Klarman once put it, the “single greatest edge an investor can have is a long-term orientation”.

“Missing a big move, however unjustified it may be by fundamentals, is to take a very high risk of being fired,” Grantham wrote in a famous 2012 client letter.

GMO’s refusal to buy technology stocks during the dotcom bubble resulted in major underperformance and investors deserted the firm, with assets under management almost halving before Grantham was eventually vindicated. A fund manager’s prime directive is “first and last to keep your job”, says Grantham.

As a result, they often have to go with the crowd, even if the crowd is doing something very dumb.

In contrast, an ordinary investor who expects to save money over the next 30 years to finance their retirement can make decisions consistent with this time horizon. All investors can suffer from short-termism, says Wiggins, “but it is easier for amateur investors to avoid it”.

“Amateur investors don’t have to engage as frequently as professionals,” says Wiggins. “They can make some sensible long-term decisions at the outset and review their portfolio sparingly; avoiding the emotionally exacting experience of living through your long-term investments on a day-to-day basis. Professional investors possess no such edge – they are compelled to constantly monitor their portfolios and must deal with the behavioural issues that stem from this.”

Ordinary investors are free to “do nothing”, says Wiggins. They “have the wonderful, liberating ability to make sensible, long-term investment decisions and then leave well alone”.

In contrast, incessant newsflow and random market movements often drive professionals to act, a problem exacerbated by the fact that it is hard to justify fees and demonstrate expertise by doing less, “so the tendency is to do more”.

Wiggins’s take on the importance of sitting tight is echoed by Jim Rogers, George Soros’s one-time trading partner, who once characterised his investing approach as waiting “until there is money lying in the corner, and all I have to do is go over there and pick it up”. In the meantime, Rogers added, “I do nothing.”

Nor do ordinary investors have to contend with the “curse of the benchmarks”, to borrow from the title of a 2016 paper written by former fund manager Paul Woolley of the London School of Economics. Woolley noted that fund managers seek to beat benchmarks indices but not by too much, as a portfolio that is radically different from an index runs the risk of serious underperformance as well as major outperformance.

That limits the potential damage caused by incompetent fund managers but it also drives perverse behaviour, with managers forced to buy certain stocks – even bubble stocks they know to be overpriced – if their returns deviate significantly from the index.

A value fund that is benchmarked to any index, said Woolley, will likely consist of some carefully-selected cheap stocks combined with dozens of expensive stocks bought purely to ensure the fund’s results don’t deviate too much from the benchmark’s. Agreeing, Wiggins describes benchmarks as a “behavioural disaster” that fosters short-termism, saying the “spectre of short-term benchmark comparisons looms large and inevitably drives decision-making”. Of course, that’s not to say that professionals don’t have advantages of their own. When it comes to trading, amateurs cannot compete with the professionals; those that try to do so are “toast”, as money manager Barry Ritholtz once put it in an old Washington Post column. However, Ritholtz agreed that ordinary investors with a long-term vision have “enormous advantages” over the pros. They don’t have clients complaining about monthly or even weekly underperformance; they don’t have to worry about how to market themselves; they don’t have to be concerned about quarterly conference calls with angry investors and the “withering media glare and cruel criticism from your peers at other funds”. Discussions about the behavioural quirks that undermine investment decision-making often stress that such issues affect professional as well as ordinary investors, but “this does not go far enough”, says Wiggins.

Over-trading, overconfidence, obsessing about benchmarks and short-term results – these problems are exacerbated when investing professionally. In a world of few edges, says Wiggins, investors who can avoid these behavioural shortcomings “should be sure to do just that”. Neil Woodford would surely agree.