Stocktake: If Trump thinks he can bully the Fed via risky policies, he might just do so 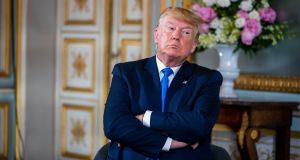 The S&P 500 enjoyed its biggest one-day gain since January last Tuesday after Federal Reserve chief Jerome Powell indicated he was open to cutting interest rates if global trade tensions start to bite. No doubt, Donald Trump shared investors’ enthusiasm, given he has been pressuring the Fed to lower rates for some time now, prompting Gluskin Sheff strategist David Rosenberg to suggest: maybe Trump really is a genius.

“What if he finally gets the steep Fed rate cuts he has been demanding?” tweeted Rosenberg. “After that, he ends the trade wars, tariffs go to zero, and the stock market surges to new highs – just in time for the 2020 election!”

Just days earlier, Rosenberg had asked if Trump wanted to lose the 2020 election by harming the US economy via tariffs on Mexican imports, so it’s fair to say he doesn’t believe Trump to be a “genius”. Still, a growing number of commentators are asking if Trump is thinking along these lines.

Nobel economist Paul Krugman, who only days earlier scoffed there was no method to Trump’s actions (“policy by tantrum, autocratic and irrational at the same time”) also asked if Trump might be encouraged by the market response. Trump pays attention to stock markets, suggested Krugman, so the market surge might convince him he can slap tariffs on Mexico and get bailed out by bullying the Fed.

Trump has since called off his Mexican tariff threat, but the broader point holds: if Trump thinks he can bully the Fed into slashing rates via risky economic policies, he might just do so.

Markets may be underestimating odds of no-deal Brexit
Are markets underpricing the risk of a no-deal Brexit? Sterling will tank if there’s a no-deal Brexit, according to a Reuters poll of strategists last week, with the median forecast saying it would end up trading between $1.15 and $1.20 compared with $1.27 last week. Currently €1 is worth about 89p, but almost half of respondents said the euro could go to parity.

Strategists don’t expect a no-deal Brexit, and clearly nor do markets; although sterling has fallen over the past month, it has remained in a pretty tight trading range over the last three years and shows no sign of breaching that range to the downside. At the same time, the next prime minister is likely to be Boris Johnson, who has taken a hardline stance on the issue, saying Britain must leave the EU with or without a deal by October 31st.

Market pricing suggests one of three possibilities. One, investors think Johnson is bluffing. Two, Johnson may be prepared to leave without a deal but the UK parliament is not and will ensure Britain doesn’t commit an act of economic self-harm. Three, markets are underestimating the odds of a no-deal Brexit.

If one is to believe the bookies, the third is a real possibility – Paddy Power is giving odds of 21/10 on a no-deal Brexit. In other words, it’s unlikely, but very possible – something not reflected in currency market pricing.

Investors spooked by market stumble
The recent market stumble has unnerved ordinary investors, judging by recent American Association of Individual Investors polls. A fortnight ago, pessimism had sunk to one of the lowest levels of the last five years, notes Schwab strategist Liz Ann Sonders. The latest survey shows a further decline in sentiment; there are now almost twice as many bears as bulls, with only 22 per cent optimistic about the direction of stocks over the next six months.

Such readings are quite rare, indicating pessimism is near extreme levels. That tends to augur well for near-term returns, notes Schaeffer’s Investment Research, with above-average returns typically ensuing over the following one-month, three-month and six-month periods.

Investors typically thrown in the towel after more sizeable declines in equity markets, notes Sonders. The current decline, in contrast, has been relatively mild, with stocks still within five per cent of all-time highs. This combination – that is, unusually high pessimism when stocks were not too far off their highs – has occurred 20 times over the last three decades. A year later, stocks were higher on all but one occasion.

European investor exodus continues
Notwithstanding recent weakness, European stocks have enjoyed nice gains in 2019 but investor enthusiasm has nevertheless been conspicuous by its absence, with European stock funds consistently registering outflows over the last year. The “exodus” is continuing, Barclays noted last week.

Strategists recently met investors in the US and Canada and “barely met anyone who was constructive on Europe”, the bank said. Europe remains the biggest underweight of the main regions; exposure to Europe among US investors has “fallen sharply”; currency traders are long on the dollar but euro shorts keep increasing; macro hedge funds are not upping their exposure.

Why? “Messy politics” and trade uncertainty are problems, but the negativity is “exaggerated”, says Barclays. Relative to other regions, Europe’s economic surprises index has rebounded, so contrarians who like to buy unloved assets may be tempted.