Who really drives the economy - Facebook, Google, or you?

Away form the headlines, it is ordinary income tax payers who contribute the lion's share of taxes to the Government 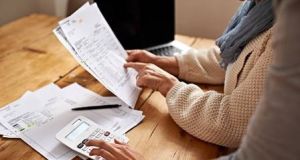 The ESRI is calling for increases in carbon and property taxes – both of which can be expected to affect the average household. But it could be argued that Irish households are already contributing a disproportionate amount to the Irish economy. File photograph: iStock

It may be the focus of economic analysis in Ireland but, in all the talk about corporation tax and what’s behind it rising and falling, it’s important to remember that it’s only one contributor to the exchequer’s coffers. And it’s far from being the biggest.

In fact, that’s you. Yes, as our figures show, higher rate taxpayers actually made a bigger contribution – from their income tax receipts alone – to the State’s finances last year than the entire yield from corporation tax.

Now the ESRI is calling for increases in both carbon and property taxes – both of which can be expected to affect the average household. But it could be argued that Irish households are already contributing a disproportionate amount to the Irish economy.

So how important are both corporation tax and income tax as sources of tax to the exchequer? Last year, the State collected almost €56 billion in net tax receipts: of this, €10.4 billion was from corporation tax.

Corporation tax receipts have been rising sharply in recent years, driven by multinationals’ tax choices and their decision to relocate intellectual property to Ireland, as well as strong growth in trading profits.

Not only that but corporation tax receipts are now some way north of the Celtic Tiger highs, with receipts of almost €7 billion recorded in 2007/2008.

According to the Department of Finance, the direct yield from corporation tax now accounts for nearly €1 in every €5 of tax collected (or about 18.6 per cent). This is the highest share on record – historically the figure has fluctuated around a band of about 14 per cent.

Within these tax figures lies another story; the concentration of tax revenues among a small number of companies. This poses a substantial risk, because if these companies were to shift their profits – and therefore how much tax they pay – elsewhere, it could substantially hurt yields.

“This is a vulnerability that we must be conscious of,” Minister for Finance Paschal Donohoe said earlier this year.

Recent figures from Revenue show that about 45 per cent, or some €4.7 billion of corporation tax revenues, was paid by just 10 companies in 2018. This means that the largest 10 payers of corporation tax accounted for more than two-fifths of the corporate tax yield. Back in 2006, the top 10 tax payers paid just about 16 per cent of total corporation tax receipts.

Moreover, if you look at Ireland’s overall tax take, then these top 10 payers accounted for about 7 per cent of total taxation receipts last year.

But if corporation tax is such a hefty contributor, what role does income tax play?

While corporation tax is undoubtedly important, it only contributes about 18.6 per cent of the State’s total tax take. And this means corporation tax is only the third largest revenue stream. Income tax remains the single most important source of taxation revenue, with VAT receipts the second largest source.

Last year, income tax (including USC) contributed more than double the take from corporations, bringing some €21.2 billion to the exchequer. It tax alone accounted for 38 per cent of the State’s tax take in 2018. To look at it another way, income tax now accounts for almost €2 in every €5 of tax collected.

Last year alone, employees contributed some €4 billion towards the cost of paying for hospitals, roads and schools through USC

And if corporation tax receipts have been rising sharply, this shouldn’t detract from the fact that so too have income tax receipts.

Back in 2000, receipts from income tax were of the order of about €9 billion, rising to about €13.6 billion in 2007. At the time, VAT (€14.5 billion for 2007) surpassed income tax receipts as the single biggest tax source at the time, driven by the construction bubble.

But last year, income tax hit more than €20 billion, an increase of about 135 per cent on 2000, or about 56 per cent on 2007. Now, there are several reasons for this; our population for one is higher, with more people at work, while wages have also risen. But personal tax rates are also much higher than they once were.

And growth in income taxes is also partly down to the “temporary” introduction of the universal social charge in January 2011. Last year alone, employees contributed some €4 billion towards the cost of paying for hospitals, roads and schools through this charge.

While the growth in the multinational sector is undoubtedly a factor in the increase in income tax yields due to greater employment – figures from the Revenue for last year for example show that employment in multinationals yielded income tax, USC and PRSI of some €7.9 billion – it should be remembered that these costs are largely borne by employees not the companies themselves.

What about other taxes?

But what about the myriad of other taxes paid? Well, on the multinationals side we have employer’s PRSI (about €7.7 billion in 2018), VAT, capital gains, as well as customs and excise.

But on the employee side it looks like we have significantly more taxes. Firstly, employees paid a hefty €2.3 billion in PRSI in 2018. When this alone is added to the income tax figure, we can see that taxes on personal income contributed €23.6 billion in total last year, or 42 per cent of total tax paid, which pushes individuals’ contribution up past €2 in every €5 of tax collected.

And among income taxpayers, we can find a cohort that are contributing more than most – the so-called “squeezed middle”, or those middle income earners paying tax at the higher rate, of 40 per cent.

According to recently published figures from the Revenue, for 2016 – the most recent year available – higher rate taxpayers really were the engine behind the State’s tax raising machine that year.

This means that, from an income tax perspective only, they contributed 20 per cent of total tax revenues. And when you add on USC and PRSI the figure will be higher again.

And more people are finding themselves in that squeezed middle, thus returning even more to the exchequer. Revenue estimates for 2019, for example, suggest that more than half a million (576,500) tax “units” will pay tax at the higher rate of 40 per cent this year. This is up by 8.4 per cent, or by 44,800 taxpayers, on 2018, and will push the proportion of higher rate tax payers up to 21 per cent of the total.

And remember, as married couples opting for joint assessment are only counted as one unit, the actual number of people in this cohort may be significantly higher.

The number of standard rate taxpayers will also increase, up to 1.2 million for 2019, according to Revenue estimates, accounting for 44 per cent of all taxpayers.

So if Ireland’s economic engine is actually being driven in large part of the individual taxpayer, how does this compare with other countries?

Well, we can pull figures for corporate taxes as a percentage of total taxation from the OECD. And these show, unsurprisingly perhaps, that corporation taxes contribute significantly more in Ireland than the OECD average.

In Ireland, 12.2 per cent of tax revenues were driven by corporation taxes back in 2017; this compares with an OECD average of 9 per cent and a figure of just 5 per cent for France but 13.6 per cent for Luxembourg.

When we include both social insurance (ie PRSI) and income tax, Ireland again has one of the highest percentage contribution rate, at some 55 per cent. While a certain proportion of this will be borne by employers (employers’ PRSI), it still puts Ireland ahead of OECD average of 50 per cent, and ahead of the UK (46.6 per cent); US (48.3 per cent); and France (46.6 per cent).