Will help-to-buy scheme fund a rebuild if I demolish a property? 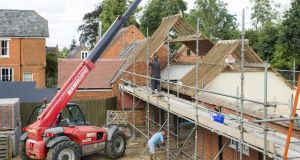 The Revenue Commissioners are quite picky about what qualifies as derelict and what doesn’t. Photograph: iStock

My partner and I are currently looking into grant options that might be applicable to us. We are hoping to buy the house that we are currently living in (my partner’s great grandparent’s house) with the view to demolishing all but the front wall.

My partner is eager to retain that one wall as a keepsake of the three generations that have gone before him but we are intending to completely demolish all other aspects of the house – internal walls, floors, windows, roof etc and build our own home to the highest of current regulations and standards in its place.

You wrote previously about access to help-to-buy for someone who bought a house and demolished it. Do you know if the couple in your article were successful in their application for the scheme?

Have you come across any other cases like ours and do you think we would qualify for the scheme?

You refer to a piece I wrote back in 2017 about a couple who had bought a derelict house an demolished it. The short answer to your question is that I have no idea whether they were successful in their application for help-to-buy but I suspect they were.

You find yourself in much the same position – but not precisely the same – and I am fairly positive that you would not be successful in your application.

This goes to show both how strict and precise the regulations around the scheme are and also how no two cases are ever quite the same.

Help-to-buy was designed to assist first-time buyers in getting on to the housing ladder. It has proved controversial, with critics arguing that it has simply kept prices for new homes artificially high – effectively subsidising property developers rather than helping homebuyers.

Data has also shown that many of those availing of the scheme did not need it per se, though it was no doubt helpful in saving them money. Figures from the Revenue Commissioners earlier this year showed that more than 40 per cent of the first-time homebuyers who had availed of the help-to-buy scheme by that stage already had the necessary deposit in place to secure a mortgage.

Assuming you qualify, you can get a refund of income tax and deposit interest retention tax (Dirt) paid on savings over the past four years up to a maximum of €30,000 or 10 per cent of the price of the property.

The figures used to be 5 per cent/€20,000 but this was increased as part of the Government stimulus in July for six months and was extended to the end of 2021 in the recent budget.

In essence, the rules are straightforward. To qualify, you need to be a first-time buyer or buyers. That means none of the aspiring buyers can ever have owned even a share of a property, either here or in any other country.

On this criteria, you are comfortable that you qualify.

You must also be borrowing at least 70 per cent of the cost of the home. Again, I assume this would not be an issue in your case. You must live there for at least five years after it is built and, in the circumstances you outline, there seems no question about this.

But, on top of that, the home you want to buy must either be newly built or being built specifically for you (self-build).

At first sight, this is a problem for you. You plan to buy an existing home albeit you are then demolishing it. So, does it qualify as newly built?

This is where that 2017 correspondent comes in. They, too, were demolishing a property they had acquired before building their own home. The big difference is that the property they bought was derelict and yours, clearly, is not. Not only is it habitable but you have been living there yourselves.

Revenue’s tax and duty manual states that the property in question “must not previously, at any time, have been used or suitable for use as a dwelling”.

The property you are considering buying – a multigenerational family home of your partner’s family – is suitable for use as a dwelling and has been used as such.

The fact that it does not suit you and that you would purchase it only for the purposes of demolition is a personal choice but it does not qualify you for the help-to-buy tax relief.

So how is the other reader’s case so different?

Well a subsequent section of the tax and duty manual clarifies that first-time buyers “may purchase a site containing a house which is derelict and which they plan to demolish, in whole or in part, with the intention of building a new house”.

As you can see from this, the fact that your partner would wish to retain a part of the property for sentimental reasons – something I get the impression you had feared might disqualify you – would not, of itself, disbar you from the relief. However, the key thing here is that the house is not derelict and uninhabitable.

Revenue is so wary of this clause that it expressly advises: “First time buyers intending to undertake such purchases should contact Revenue, who will consider eligibility for help-to-buy in such circumstances on a case by case basis.”

So you can see that they are quite picky about what qualifies as derelict and what doesn’t. I cannot see any circumstances in which anyone approaching Revenue with a Help to Buy application for a property that they intend to demolish but in which they had previously been living – albeit as tenants, not owners – would be considered suitable recipients of Help to Buy relief.

It is a pity because I think it is a wonderful idea that your partner and you would look to retain an ancestral link to a property or site, especially the idea of retaining part of its character. It may still be possible for you to do so but, unfortunately, that will not be with the assistance of help-to-buy.

In answer to your other question – whether I have come across other similar cases – the answer is no. Your is the first query relating to help-to-buy and the demolition of existing property since that 2017 query.

That’s not to say no one else has found themselves in that position. I only respond to questions from people who actively approach me. That’s not necessarily a representative sample of anything.