Trillion-dollar companies – will Apple get the first bite?

Some say sector is in a bubble, but current race looks more sustainable than dotcom days 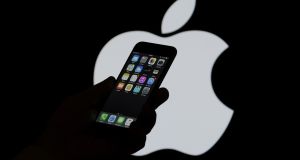 Apple’s current dominance pales in comparison to that enjoyed by IBM in the mid-1980s. Photograph: by Jaap Arriens/NurPhoto via Getty Images

The race to become America’s first trillion-dollar company is likely to be settled sooner rather than later, with Apple in pole position to finally cross the 13-digit threshold.

Recently valued at $950 billion, the iPhone maker is within touching distance, and might well attain trillionaire status when it announces its second-quarter earnings later this month. However, a number of other technology mega-caps are not far behind. Amazon is worth some $830 billion, Google parent Alphabet is hovering around the $800 billion mark and Microsoft is valued at $775 billion.

The race towards the trillion mark follows a huge surge in the value of tech shares over the last year. Amazon has the most momentum, having gained 75 per cent over the last 12 months, but Microsoft and Apple are also defying the law of large numbers, having gained by roughly 50 and 35 per cent respectively. Google is the relative laggard, although a 20 per cent gain is hardly to be sniffed at.

The last time there was widespread talk of trillion-dollar companies was at the height of the dotcom bubble back in the late 1990s. Not long after the AOL-Time Warner merger was announced in 2000, AOL chief executive Steve Case said he wanted to make the new firm “the world’s first trillion-dollar company”.

For a time, network equipment maker Cisco was the most valuable company on the planet and many excited observers thought it might be the first to cross the trillion-dollar level. The biggest market capitalisation seen during the dotcom era belonged to Microsoft, which was worth $619 billion at the end of the century.

Of course, the trillion-dollar talk died down once the dotcom bubble burst in March 2000. Microsoft didn’t reclaim its dotcom-era peak until last year; Cisco went on to lose almost 90 per cent of its value during the crash and is worth around $200 billion today; the AOL-Time Warner merger is widely regarded as the worst of all time.

While some say sentiment towards the technology sector is once again euphoric, the current race towards the trillion-dollar level looks much more sustainable than the last.

At its dotcom peak, Microsoft traded on over 70 times earnings – four times greater than today’s valuation of Apple. The iPhone maker may be worth a fortune but it’s far from expensive. The stock trades at a discount to the wider market and is lauded by value investing icon Warren Buffett. The Berkshire Hathaway chief has stocked up on Apple shares over the last year, so much so that Apple is now the company’s second-largest shareholding.

The second-most valuable company in the world, Amazon, trades on what appears to be an eye-watering valuation multiple, but tech valuations are largely undemanding, according to a recent Goldman Sachs research note. It found that over the last decade, 87 per cent of the share price gains enjoyed by today’s tech megacaps (Apple, Amazon, Google parent Alphabet, Microsoft and Facebook) came from profits and only 13 per cent from increases in valuation multiples.

“Unlike the technology mania of the 1990s, most of this success can be explained by strong fundamentals, revenues and earnings rather than speculation about the future,” Goldman concluded.

Similarly, while Apple may be the most valuable company in history, worth more than $300 billion more than Microsoft at its dotcom era peak, things are not quite as unprecedented as they seem. Adjusted for inflation, Microsoft’s $619 billion peak in late 1999 equates to about $900 billion today.

According to data from the University of Chicago’s Centre for Research in Security Prices (CRSP), General Electric’s peak valuation of $594 billion in August 2000 translates to an inflation-adjusted figure of some $850 billion, while Cisco and Intel’s dotcom-era peaks also equate to more than $700 billion today. Similarly, while Apple has been the top dog for some time now – it has been the most valuable company on the US market for almost all of the last six years – CRSP data shows other companies have been far more dominant than Apple is today.

Apple accounts for 3.2 per cent of the entire US stock market. Contrast that with telecom giant AT&T, which comprised 13 per cent of the entire market in 1932; General Motors, which constituted almost 8 per cent of the market in 1928; and IBM, which had a 6.8 per cent weighting in 1970. Overall, Apple ranks only ninth in terms of historic index weightings. Of course, the US stock market was much smaller in the old days, so too much attention should not be paid to 1930s data. Even if one sticks to relatively modern times, however, Apple’s current weighting appears unremarkable. Since 1980, five companies – IBM, AT&T, Microsoft, Exxon Mobil and General Electric – have at one stage or another constituted a greater share of the US stock market than Apple in 2018. In particular, Apple’s current dominance pales in comparison to that enjoyed by IBM in the mid-1980s. Between 1983 and 1985, IBM accounted for more than 6 per cent of the S&P 500 index – well ahead of Apple, which constitutes 4.1 per cent of the same index today. While Amazon, Alphabet and Microsoft are not far behind Apple in terms of market value, IBM was worth more than twice as much as its nearest competitors in each of those years.

If IBM had appreciated at the same rate as the overall market over the last three decades – a big if, given its troubles in recent years – it would be worth approximately $1.5 trillion today. In spite of the rapid appreciation in Apple shares over the last year, the company actually accounted for a larger share of the stock market in 2012. This was also the case in 2015, when Apple was briefly worth twice as much as the next biggest S&P 500 company.

The point is, today’s record-breaking market capitalisations aren’t quite as record-breaking as they appear. Stocks typically rise over time, so it’s inevitable that hitherto untouched levels – $1 trillion, $2 trillion, $5 trillion, and so on – will eventually be breached. The US stock market has quadrupled since March 2009, gaining some $20 trillion over that time, so it’s hardly surprising that a number of companies are now nearing the mythic $1 trillion milestone. Apple’s current lead means it remains the most likely to wins the race, although unexpectedly strong earnings from Amazon, Alphabet or Microsoft later this month might well narrow Apple’s advantage.

Earnings aside, the continued strength in the technology sector in what has been a lacklustre year for the overall market suggests the iPhone maker may well have company in the trillion-dollar club later this year.