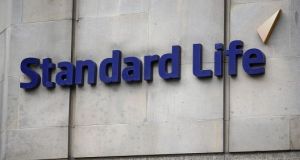 The sale Phoenix Group will trigger a “return of value” of about £1.75 billion to the group’s shareholders – including almost 57,000 in Ireland

Standard Life Aberdeen’s sale of its insurance business to Phoenix Group has been overwhelming approved by shareholders after its chairman pledged it would help transform the company into one of the world’s leading investment businesses.

More than 99 per cent of shareholders of Standard Life Aberdeen, which was formed last year through the merger of insurer Standard Life and fund manager Aberdeen Asset Management, backed each of the three resolutions relating to the sale.

The sale will trigger a “return of value” of about £1.75 billion to the group’s shareholders – including just under 57,000 in Ireland.

Gerry Grimstone, chairman of the group’s board, said the sale to Phoenix represented a “decisive break from our past as an insurer” and supported the company’s “ambitions of becoming a world-class investment company”.

The chairman also reassured shareholders that Standard Life Aberdeen was well-prepared for Brexit. “Everything we need to do [for Brexit] will be done by the required date,” he said.

Mr Grimstone added that Standard Life Aberdeen has had to submit paperwork “as big as I am” to regulators as it attempts to prepare for the UK’s exit from the EU and warned that functions that were once carried out in Edinburgh or London will now be done in Luxembourg and Dublin.

He said that 400 people have left the the company since Standard Life took over Aberdeen last August.

The chairman added the £3.2 billion Phoenix deal would close by the third quarter.

At that stage the company has committed to return £1 billion to shareholders in a share consolidation exercise. This will involve the issue and subsequent redemption of new “B” shares in the group.

The company says the value of the exercise for shareholders will be a minimum of 33.4 pence sterling for every Standard Life Aberdeen share currently held.

The return of value is not a windfall as the company is effectively buying back part of investors’ existing holding. Any gain for shareholders on the original purchase price of their shares will be considered under capital gains tax rules.

1 Johnny Ronan loses out on €315m Dublin docklands deal
2 Michael Fingleton-linked lands at centre of controversial housing plan in Shankill
3 Bank of Ireland takes €169m charge for 1,450 job cuts
4 Permo is cool on Ulster deal; red light for travel; and Johnny Ronan loses out
5 City businesses can’t afford to wait for a Covid-19 vaccine
6 Debenhams' landmark Limerick premises guiding at €9m
7 PTSB plays down Ulster Bank talk as it sells €1.4bn of loans
8 How much state pension will I get next year?
9 Air travel recovery stalled by ‘confusion and chaos’ - DAA chief
10 How long can Government afford to keep State pension age at 66?
Real news has value SUBSCRIBE
Save money on international transfers