Stocktake: US indices finally ‘sit up and pay attention’ 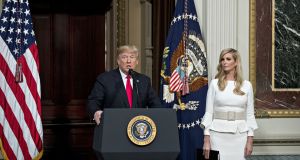 US president Donald Trump and Ivanka Trump in Washington on Thursday. The president’s grasp of basic economics is even weaker than it already appears to be. Photograph: Andrew Harrer/Bloomberg

US indices have seemed oblivious to the troubled mood pervading global markets in 2018 but that finally changed last Wednesday, when the S&P 500 suffered its biggest one-day fall in eight months.

Things were even worse in tech-land – the Nasdaq 100’s 4.4 per cent fall was its biggest one-day decline since the dark days of August 2011. Unlike then, there was no obvious catalyst for this selloff.

Commentators can point to rising bond yields, higher rates, trade wars and slowing global growth, but these issues are not new. The reality is markets are prone to sudden about-turns in sentiment; issues that seem manageable can suddenly come to seem much more pressing, and last week saw US indices “sit up and pay attention to what’s going on”, as Société Générale put it.

Ignoring the pressures affecting emerging market stocks and currencies, the S&P 500 had just recorded its least volatile third quarter since 1963 and gained for six consecutive months. Surveys showed fund managers continuing to overweight US equities, assuming the global divergence would persist and deepen. Selloffs are unnerving but a “little air coming out is a healthy thing”, as Themis Trading put it.

In 2016, Donald Trump decried the bull market as a bubble manipulated by low interest rates, Josh Brown of Ritholtz Wealth Management noted last week. Now, he’s saying the bull market is legitimate and the Federal Reserve is crazy for wanting to raise rates.

Trump criticised the Fed in September but went further last week, saying it “has gone crazy”.

Fed chief Jerome Powell doesn’t appear bothered, saying his focus “is on controlling the controllable”. IMF head Christine Lagarde was similarly dismissive, saying she “would not associate Jay Powell with craziness” and it was “legitimate and necessary” for the Fed to raise rates.

Indeed it is. Unemployment is at 49-year lows and massive tax cuts have juiced an already strengthening economy, so the Fed was bound to do what it always does in buoyant times – hike rates.

Trump sees market gains as proof of his economic genius, boasting before the recent peak that stocks had already registered 102 all-time highs during his administration, “a presidential record”. Accordingly, last week’s name-calling was likely a childish attempt to find a scapegoat in the event stocks keep going south.

If he doesn’t actually grasp the Fed’s logic, if he truly believes it has “gone crazy”, then his grasp of basic economics is even weaker than it already appears to be.

Action was ugly under the surface

The S&P 500 was at all-time highs a week before last Wednesday’s bloodletting. Even after the selloff, it was just 5 per cent off its peak, which might lead some to see the recent turbulence as a storm in a teacup. However, individual stocks were already suffering more hardship than the figures suggest.

Market breadth has been weak as a stealth correction took place. Even before the selloff, fewer than half of S&P 500 stocks were trading above their 50-day average. By Thursday, roughly 60 per cent of the S&P 500 had fallen into correction territory and more than a quarter were in bear markets (declines of at least 20 per cent).

The average large-cap stock, noted Bespoke Investment, was 13 per cent below its 52-week high; the average mid-cap had suffered even greater falls; the average small-cap stock was down by 20.7 per cent – bear market territory.

In short, the selling didn’t begin last Wednesday; many stocks were feeling the pain before the bleeding finally became evident to all.

Just how scared are investors?

Things have certainly got jittery, with the Vix, Wall Street’s fear index, hitting its highest level since April and recording its 12th largest one-day spike in history last Wednesday. However, that reflects the fact volatility had been abnormally subdued.

The Vix tends to exceed 30 in times of crisis and went as high as 50 during February’s correction; late last week, it was trading at 24, so volatility doesn’t look like it has peaked just yet. Similarly, the S&P 500 is still up this year and is merely back to where it was trading last July. Contrast that with China and Europe, which fell to levels last seen in 2014 and early 2017 respectively, and it’s obvious things could get worse for US indices before they get better.

However, there were some signals suggesting capitulation might not be far away. CNN Money’s Fear & Greed sentiment indicator fell from 51 to eight, mirroring the rapid descent seen near February’s bottom. Single-digit readings, too, are associated with the kind of excess fear seen near turning points.

More than half of S&P 500 stocks were technically oversold. Less than a quarter were trading above their 50-day average. While this number can fall below 10 per cent during deeper corrections, sub-20 readings are often associated with market bottoms.

Irrespective of the market direction, it’s likely things will stay volatile for now. Buckle up.

1 Lahinch Golf Club runs out of its own cash after €3m Covid-19 hit
2 Son putting elderly dad under pressure to sign over land
3 Fiona Reddan: Who’s afraid of Revolut? Not AIB and BOI it seems
4 Denis O’Brien’s Digicel sees earnings drop 8% in second quarter
5 Must I pay tax on sale of inherited apartment in Baltics?
6 Reopening businesses can claim ‘restart week’ payment
7 France demands digital tax payments from US tech groups
8 Family in court dispute over hotels in Dublin and Galway
9 Why Lehman Brothers was allowed to fail
10 Boots Ireland appoints Stephen Watkins as new MD
Real news has value SUBSCRIBE
Save money on international transfers