Despite an ECB denial, speculation the global liquidity punch bowl is about to be removed is growing 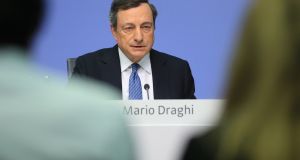 The job of central bankers, former Federal Reserve chairman William McChesney Martin once remarked, is to take away the punch bowl just as the party gets going. After almost a decade of monetary stimulus, is the global liquidity punch bowl finally being taken away?

ECB president Mario Draghi’s remark last week that reflationary forces had replaced deflationary ones sparked a flurry of activity in European and global financial markets, with German 10-year yields climbing the most since 2015 and the euro hitting a 14-month high.

The ECB was quick to say markets had overreacted, denying it was going to taper its €60 billion-a-month bond-buying programme any time soon. However, speculation regarding a 2013-style “taper tantrum” continues to grow.

UK rates are now expected to rise in 2017, following unexpectedly hawkish comments from Bank of England governor Mark Carney. Rate hikes are on the cards in Canada, where two-year bond yields last week exceeded 1 per cent for the first time since January 2015. US rates continue to be gradually raised. If the ECB pulls back, then the move towards global monetary tightening has the potential to inject volatility into financial markets.

We saw as much last week, with the German Dax index falling below its 50-day moving average for the first time since April and the S&P 500 testing the same juncture. 2017 has been very calm thus far, but last week’s action suggested the second half of the year might be more volatile than the first.

Some increase in volatility is a given. After all, the first half of the year was the “most peaceful market in history”, as Pension Partners’ Charlie Bilello noted last week.

Bilello noted that fear, as measured by the Vix index, was nowhere to be found lately – 10 of the Vix’s 20 lowest closes in history have occurred in the last two months.

The last time the S&P 500 suffered a weekly decline of 2 per cent, notes LPL Research, was in September. Indeed, there has been a weekly decline of that magnitude on only one occasion since markets bottomed in February 2016, a level of calm unseen in more than half a century. The US index has never been more than 2.8 per cent away from its highs in the first half of the year, the second-smallest peak-to-trough decline on record.

Volatility may now be returning, but history indicates there’s no need to go stocking up on tinned food just yet. Bespoke Investment Group data shows there have been 16 years where first-half drawdowns did not exceed 5 per cent.

“The second half of the year also generally saw smaller-than-average drawdowns,” says Bespoke, averaging just 6.3 per cent. That’s roughly half that seen in normal years, suggesting the recent spike in volatility is likely to be contained.

Good idea, say optimistic types; it will incentivise them to work hard for their money. Bad idea, say cynics; it will make them less inclined to rock the boat and more likely to suck up to management.

Alas, the cynics are right. According to a new study, Is Board Compensation Excessive?, overpaying board members leads to cronyism, less monitoring, “collusion and mutual back-scratching”.

CEOs at such companies are more likely to be overpaid and are provided with “additional immunity and job security”.

The conclusion – excess pay is symptomatic of “board entrenchment where overcompensated directors are not necessarily focused on protecting shareholder interests” – is pretty commonsensical, but don’t expect executives to stop doling out the old clichés about how they need to pay for top talent.

Quincy Jones gets his own ETF

There’s an exchange-traded fund (ETF) for everything these days, as shown by the announcement that a music-streaming ETF named after legendary music producer Quincy Jones is about to hit the market.

The Quincy Jones Streaming Music, Media & Entertainment ETF is the latest in a long line of somewhat bizarre niche ETFs. Fancy an investment fund consisting solely of stocks connected to the medical marijuna industry? There’s an ETF for that. There’s an ETF for obesity (the ticker symbol is SLIM), for whiskey, wearable technology, drones, robotics, video games, and cybersecurity stocks.

Political geeks might like the forthcoming Republican Policies Fund, the Democratic Policies Fund, or the European Union Breakup Fund. Liberal investors might like the Gender Diversity ETF (the ticker symbol is SHE), while not-so-liberal investors might prefer the Inspire Global Hope ETF (the ticker is BLES), which rests on “biblically responsible” principles.

Many so-called thematic ETFs don’t survive – sadly, the Dermatology and Wound Care ETF, for example, is no longer with us. Musically-minded investors can only hope the Quincy Jones ETF does not meet the same fate.

1 How much state pension will I get next year?
2 PTSB plays down Ulster Bank talk as it sells €1.4bn of loans
3 Up or down – how much is your Local Property Tax this year?
4 Irish tech company Asavie acquired by Nasdaq-listed Akamai
5 Am I crazy to consider switching to an Ulster Bank mortgage?
6 Housing crisis will be permanent unless there is radical rethink, industry warns
7 How long can Government afford to keep State pension age at 66?
8 Intel rival AMD targets 5g markets with Xilinx purchase
9 Disposable income in Ireland rose 28% between 2012 and 2019
10 Brexit to curb services trade with UK, accountants group warns
Real news has value SUBSCRIBE
Save money on international transfers