Oil falls into a bear market – is this the apoc-oil-ypse?

StockTake: the most stress-free job, FOMO for AIB, and beware your psycho CEO 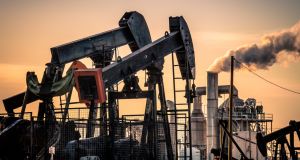 Oil prices have fallen by more than 20 per cent, but don’t start stocking your underground bunker with tinned food just yet. Photograph: iStockphoto

Oil prices fell into official bear market territory last week, having fallen by more than 20 per cent in recent months. Is the end of the world nigh?

“This is like a falling knife right now,” said Energy Aspects co-founder Amrita Sen last week. “I genuinely haven’t seen sentiment this bad ever. We have had clients emailing saying they have been trading this for 20 or 30 years and they have never seen something like this.”

Other excitable commentators note oil prices have suffered their worst performance for the first six months of the year since 1997. However, that’s a mere accident of the calendar. Oil prices have always been volatile and bear markets are very common. How common? Since 1985, oil has been in a bear market – that is, more than 20 per cent off its trailing 52-week high – more than one third of the time, according to LPL Research.

What’s more, such periods tend to be good times to initiate long positions. On average, oil prices have been 18 per cent higher a year later. In contrast, when oil has not been in a bear market, prices have historically tended to be flat a year later.

It’s not productive to greet perfectly normal price gyrations as apocalyptic. Far from heralding financial apocalypse, history suggests oil will be back in bull market territory sooner rather than later.

A stress-free year for equity investors

In contrast to oil, all remains quiet in equity markets, and investors will be hoping the second half of the year turns out to be as stress-free as the first.

The S&P 500 has already registered 24 all-time highs this year, notes Bespoke Investment Group. What’s more, the biggest sell-off during that time has been just 2.8 per cent. Only once – in 1995 – has there been a smaller maximum drawdown in the first half of the year.

All-time high after all-time high and extraordinarily low levels of volatility: investors, says Bespoke, “really have gotten off easy in 2017”.

AIB sale and the FOMO factor

No one knows for sure if AIB shares will prove a good investment, but mountains of data confirm it’s generally a bad idea to buy shares during an initial public offering (IPO). So why do so many investors get excited when a company floats its shares on the stock market?

Those managing the AIB sale last week said IPO orders below €4.40 “risk missing out” on the shares. The language is appropriate, in that IPO fever is invariably driven by FOMO – that is, fear of missing out.

Such thinking is quite irrational. Shares in AIB, like Bank of Ireland, Permanent TSB and every other publicly traded bank, will still be available for purchase next week and the week after. It’s worth noting Warren Buffett has not bought into an IPO in more than three decades, his reasoning being that it is “almost a mathematical impossibility to imagine that, out of the thousands of things for sale on a given day, the most attractively priced is the one being sold by a knowledgeable seller [company insiders] to a less-knowledgeable buyer [investors].”

Panic buying is as unproductive as panic selling. With IPOs, it’s wise to reject one’s FOMO impulses and say: what’s the rush?

Are psychopathic CEOs bad for business?

Investors should be wary of psychopathic chief executives, according to a new UK study.

Last year, an Australian study found around one in five CEOs could be considered psychopathic, a rate similar to that found in prisons. However, the latest research suggests that while psychopaths may be attracted to the business world, their methods aren’t good for business – “psychopathic-like tendencies” among CEOs are “particularly destructive” for shareholder wealth.

Psychopathy is associated with “parasitic and irresponsible behaviour, pathological lying, emotional insensitivity, impairment of behavioural controls, elevated sense of self-worth and stimulation-seeking”. (On an aside, does this sound like a certain president, who shall remain nameless?)

The authors used a number of measures to try and identify such managers. They looked for excessive risk-taking; aggressive (“demolish”, “attacking”) and self-regarding (“I”, “myself”, “mine”) language in annual reports; a lack of integrity, as indicated by regulatory and audit problems; and a lack of empathy, as measured by low charitable donations.

Unfortunately, psychopaths often rise swiftly to the top, the study says. Insincere charm can be mistaken for charisma; ruthlessness can be viewed as the ability to make tough business decisions; their “mastery of deception” helps them to cover up their failings. To protect their employees and shareholders, companies ought to conduct a psychological evaluation when recruiting for top talent.