Stocktake: Stocks soar but there may still be trouble ahead 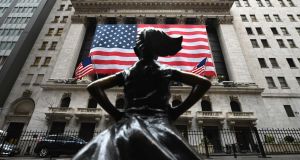 The Fearless Girl statue in front of the New York Stock Exchange. The S&P 500 soared by 9.4 per cent on Tuesday despite the bear market. Photograph: Angela Weiss/AFP via Getty Images

You can lose lots of money quickly during bear markets but the reverse is also true. That was certainly the case last Tuesday, when the S&P 500 soared 9.4 per cent and the FTSE All-World index enjoyed its second-best day in history.

Stocks continued to rally in the coming days, with the Dow Jones Industrial Average soaring more than 20 per cent in three trading sessions. The rally cheered stressed investors, but it’s premature to assume the worst is over. Stocks had suffered their fastest 30 per cent decline in history, so some sort of technical snapback rally was overdue. Bank of America’s Stephen Suttmeier notes the second-, third- and fourth-fastest declines all occurred during the depression-era corrections in 1934, 1931 and 1929, respectively, which is “not good company for 2020”.

Similarly, Morningstar’s John Rekenthaler notes that, over the last century, no bear market exceeding 30 per cent has ever ended after a single month. That’s not to say the rally should be dismissed as a dead cat bounce. Fears of a credit crisis have eased and markets are less panicky, following enormous central bank intervention and a $2 trillion fiscal stimulus package. The fact stocks soared in the face of Thursday’s record-breaking surge in US jobless claims shows much bad news had already been baked into market prices. Nevertheless, the newsflow will remain awful for some time, and history certainly indicates the rollercoaster ride isn’t going to end any time soon.

1 Michael Smurfit: ‘I asked Trump to invite me to the White House for my 80th birthday’
2 Small businesses are cannon fodder in zealous anti-virus experiment
3 ‘I’m so lucky to be in the Caribbean – a million miles from Derry Girls’
4 Ireland stands to benefit in a big way from investing in public transport
5 Virgin Media’s Gavan Reilly named most influential Irish journalist on Twitter
6 Covid-19 crisis to trigger 20% fall in FDI
7 Charlie Chawke plans 290 apartments and hotel on Goat pub site
8 Tax and the Pandemic Unemployment Payment: Your questions answered
9 Revenue fears fraudsters tapped bank details of 3,000 taxpayers
10 Wellness company to create 100 jobs with Cork City plant
Real news has value SUBSCRIBE
Save money on international transfers