Reopening US economy prematurely would be major financial mistake 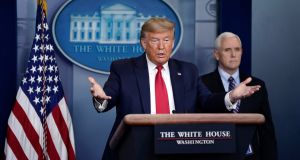 US president Donald Trump’s emphasis on the economic risks posed by the Covid-19 shutdown is shared by some in the business community. Photograph: Drew Angerer/Getty Images

The economic shutdown caused by coronavirus is upsetting US president Donald Trump, who wanted the United States to be “raring to go by Easter” before eventually abandoning the plan to reopen the economy.

Trump would love this bear market to be over as soon as possible and is clearly prioritising the economy over health, but prematurely reopening the economy wouldn’t only be morally dubious – it would be a major financial mistake. Trump’s emphasis on the economic risks posed by the shutdown is shared by some in the business community. Former Goldman Sachs chief executive Lloyd Blankfein wants lower-risk cases to return to work within weeks, warning that “crushing” the economy is “also a health issue”. However, this is wishful thinking.

There is no middle ground; as Bill Gates has argued, you can’t ask people to keep going to restaurants, to buy new houses and to “ignore that pile of bodies in the corner”.

The sooner you do it in a tough way, says Gates, the sooner you can undo it and return to normal. Markets jumped last week following tentative data from Italy suggesting the coronavirus outbreak may be peaking. Similarly, Chinese stocks gained in early February, as investors noted the Wuhan lockdown was working. Investors aren’t delusional; they know prematurely ending shutdowns only creates more uncertainty and prolongs the crisis. Trump’s plan wasn’t just heartless – it was dumb.