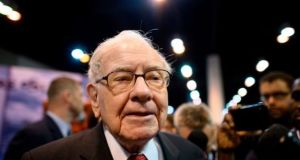 Warrne Buffet is sitting on a record $128 billion in cash. Photograph: Johannes Eisele/AFP

You can feel pretty stupid during bear markets. You think back on how you ignored those negative headlines emanating from China in January and February; you read about how some analyst or another “called” the crash; you watch years of investment returns vanish in weeks and you say, why didn’t I take my profits when I had the chance?

If it’s any consolation, even the best investors get badly bloodied during bear markets. Take Warren Buffett. The oracle of Omaha is sitting on a record $128 billion (€116 bn) of cash, so investors might assume he’s been waiting patiently and is all set to profit from the crisis. However, the last few weeks “have been just as painful on his portfolio as it has on the broader market”, notes Bespoke Investment.

Looking at Berkshire Hathaway’s top 20 holdings, Bespoke notes the average stock had fallen 37 per cent. Seven of Buffett’s top nine holdings are down between 34 and 44 per cent. Buffett’s unlikely to be bothered; he’s seen this before and knows major drawdowns are part of the game. Berkshire’s stock endured falls of between 37 and 51 per cent four times between 1987 and 2009, or roughly once every five years. In short, investors shouldn’t beat themselves up. As Ritholtz Wealth Management’s Ben Carlson once noted, you’re not as smart as you think in bull markets and you’re not as dumb as you think in bear markets.