Stocktake: Has the Tesla bubble burst? 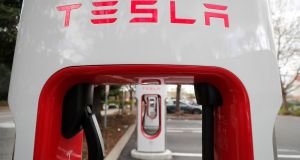 Tesla’s skyrocketing valuation was the subject of a number of Stocktake columns in February, the last of which cited a report warning that the bursting of the Tesla bubble was a case of “not if, but when”. As it happens, the stock peaked a day later before falling all the way down from $950 (€ 885) to $350 (€ 325).

Tesla’s valuation never made much sense to Stocktake but the chaos caused by the coronavirus outbreak is what catalysed the plummeting share price, not specific valuation concerns. General Motors, Ford, Daimler and BMW all traded on lowly valuations prior to mid-February’s market peak; that hasn’t stopped them suffering selloffs ranging from 40 to 50 per cent. It may be premature to say the Tesla bubble burst or for the bears to claim victory; you can get a trade right for the wrong reasons.