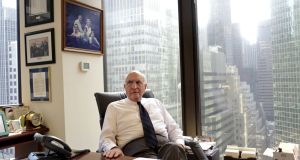 Home Depot founder Kenneth Langone railed against ‘all of these people with these highfalutin’ ideas’. File photograph: Yana Paskova/For the ‘Washington Post’ via Getty Images

Here’s a shock – Wall Street billionaires don’t like the idea of higher taxes. Oaktree’s Howard Marks, Guggenheim’s Scott Minerd, Michael Bloomberg and Michael Dell have all criticised recent proposals for higher taxes. Many are particularly aghast at Democrat congresswoman Alexandria Ocasio-Cortez’s proposals for a marginal tax rate of 70 per cent on earnings over $10 million annually. “Name a country where that’s worked – ever,” said Michael Dell at the Swiss resort of Davos last month, before another panellist informed him such marginal rates were the norm in America from the 1940s to the 1970s. That exchange was widely publicised and Dell later admitted he was no expert on the “history of taxes” but it seems Home Depot founder and Trump-supporting billionaire Ken Langone didn’t hear about it.

“That’s what happened in Venezuela”, he tells Barron’s magazine in an unintentionally hilarious interview. Never mind “all of these people with these highfalutin’ ideas” – the “poorest of the poor, the most ignorant of the most ignorant” are now starving in Venezuela. This is not the first time Langone has railed against economic populism, warning in 2014 that populist criticisms resembled “what Hitler was saying in Germany” in 1933. Can you be a communist and a Nazi? Or is that distinction too “highfalutin’”?

Apple is doomed, doomed I tell you. That sentiment was widespread last month, following a profit warning and a share price slide that wiped almost $450 billion (€398bn) off the company. The doomsayers were premature, however: last week Apple regained its title as the world’s most valuable company. Stocktake argued in January that the obituaries were premature. The stock has often tanked over the years, with each drawdown marked by the same apocalyptic commentary. Now, too much should not be made of Apple’s recent 24 per cent rebound. Almost every stock has gained lately. Microsoft, Amazon and Google are only slightly less valuable, and no doubt the “most valuable” title will be swapped around in coming weeks.

Also, Apple’s $820 billion market capitalisation means it may be some time before it regains trillionaire status. Rather, the point is investors should be wary when commentators turn bearish after, not before, a stock crash. It brings to mind the magazine cover indicator, the tendency for sensationalist magazine covers to occur near turning points (think of Time’s “Holding on for Dear Life” cover at March 2009’s market bottom or BusinessWeek’s infamous “Death of Equities” cover in 1979). Apple’s recent woes made for snappy headlines, but such commentary is mainly infotainment – not sober investment advice.

Time for stocks to take a break?

The S&P 500 has soared 16 per cent since Christmas but there’s still debate as to whether this rally is merely a dead cat bounce. Stocks remain below their 200-day moving average, a widely-watched measure of the long-term trend. According to Ritholtz Wealth Management’s Michael Batnick, there have only ever been five rallies where stocks gained at least 15 per cent and remained below their 200-day average; on four occasions, they were of the “dead cat variety”. The sample size is tiny, but it wouldn’t be strange if stocks dipped or consolidated. The current uncorrected gain is “close to the outer limits” seen since the bull market began in 2009, says Fat Pitch blogger Urban Carmel.

Furthermore, 88 per cent of stocks are trading above their 50-day average – the highest reading since April 2016 and higher than 96 per cent of historical readings. More than half of stocks are technically overbought, notes Bespoke Investment, the highest since stocks topped out in January 2018. Still, volatility has fallen to pre-October levels and market breadth has been impressive. In recent years, rallies were led by mega-cap stocks such as Apple and Amazon, but most stocks have participated in the recent advance. That’s healthy, suggesting any near-term dip will be bought by increasingly relaxed investors.

Market timing is tricky but you can make a bundle if you buy at the bottom – right? Not really, says London-based Albert Bridge Capital’s Drew Dickson. He gives the example of two 55-year-olds who began investing $1,000 annually into the S&P 500 30 years ago. The first is the greatest/luckiest investor in history; he buys at the lowest point of each year. The second investor, however, is hopeless, investing $1,000 at the worst possible time each year. Unsurprisingly, Investor 1 does better; by 2019, his nest egg is worth $155,769. However, Investor 2 does okay, ending up with $122,822.

“The difference between the perfect idiot and the man with perfect foresight”, says Dickson, “is the idiot has nearly 80 per cent of the nest egg as the impossibly accurate market-timer”.

Importantly, the differentials are similar over other 30-year periods.

Could you pick the perfect day to invest every year? No, but the real eye-opener is there’s little point in even trying. “Don’t get cute”, Dickson cautions. “Even if you think you are better than average, you just aren’t going to get much out of it”.