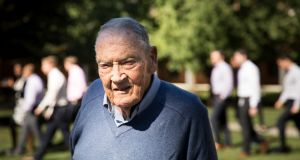 Ordinary investors lost their greatest champion last week with the passing of Vanguard founder John Bogle. Bogle (89) was a “hero” who did more for American investors “than any individual I’ve known”, Warren Buffett said in his 2017 letter to shareholders.

That’s no exaggeration. Bogle was derided after launching the first index fund for ordinary investors in 1976. The idea investors should aim to track rather than beat markets was seen as un-American, and critics dismissed the fund as “Bogle’s folly”. Outspoken and dogged, Bogle persisted. For four decades, he preached a simple, important message: think cheap and think long-term.

Investors in managed funds don’t beat the market because their costs are too high. Cost is “a handicap on the horse”, as Bogle put it. “If the jockey carries a lot of extra pounds, it’s very tough for the horse to win the race.” Once you “strip all the baloney out of it”, investing is really “all about simplicity and low cost”. Forget stockpicking and looking for the needle in the haystack – “just buy the haystack!” Over time, investors bought into Bogle’s message. Today, Vanguard has some $5 trillion assets under management. Bogle could have been a billionaire, but he opted instead to structure Vanguard so it was owned by its investors. Accordingly, Vanguard’s growing profits were passed onto retireees in the form of lower costs. Bogle was, as the Collaborative Fund’s Morgan Housel put it, “the biggest undercover philanthropist of all time”.

Are markets complacent over Brexit risk?

There may have been political chaos in Westminster last week, but currency traders weren’t bothered, with sterling hitting two-month highs against the euro in the wake of the huge vote against Theresa May’s Brexit deal. Markets expect to avoid the nightmare of a no-deal Brexit; that would be “economic suicide” and “guaranteed recession”, said Global Asset Management’s Charles Hepworth, who doesn’t expect parliament to commit “hara-kiri”.

With May’s government surviving the subsequent no-confidence vote and the UK parliament now becoming more involved in cobbling together a new deal, markets are betting a more centrist approach is now increasingly likely. The March 29th Brexit deadline will likely be extended and there may be, says Goldman Sachs, a “softer, later Brexit – or no Brexit at all”. Not everyone is cheery, however. Invstr chief executive Kerim Derhalli warns markets are being “‘naively optimistic”, saying Brexit could only be avoided via a second referendum or a general election. The one certainty is major “civil disorder”, with a Jeremy Corbyn government creating a “greater market shock than a no-deal Brexit”. So what’s next? No idea, says UBS, which is advising clients to avoid taking “directional views on sterling and UK assets”. That looks wise; given the political madness that has convulsed the UK since June 2016, investors really should rule nothing out.

Analysts have been busy cutting estimates for US earnings season, which is now under way, and profits expectations are likely to continue being cut for some time. Over the last three months, analyst estimates have been cut by a pretty hefty five percentage points.

This process will likely take some time to play out, judging by Deutsche Bank data showing that, historically, large cuts in one quarter have been followed by further cuts in forward estimates. Further downgrades don’t mean stocks can’t gain, however, Deutsche Bank noting that indices advanced during other periods in 2012 and 2016 when analysts reined in earnings expectations. There’s no guarantee that will happen again, but investors are braced for an earnings impact – options prices imply the average stock will move up or down by 7.4 per cent on earnings day, says Goldman Sachs, the highest implied volatility since the financial crisis.

A healthy rally or a dead cat bounce?

The S&P 500 has staged a furious rally. Is the bull market alive and well or is this a dead cat bounce? Both bulls and bears can argue their case. By the end of last week, the index was 11 per cent off its lows but also 11 per cent off October’s highs. The broad-based rally has looked healthy, but stocks remained just below their 50-day moving average. Similarly, history offers encouragement to both camps. Bespoke Investment found 12 prior instances where stocks staged a rapid rally (at least 10 per cent over 10 days) following a sharp fall (over 15 per cent in less than three months). Three months later, stocks were higher on nine occasions. A year later, stocks were higher in all but two instances, enjoying median gains of 18 per cent. That’s the good news. The bad news, notes Fat Pitch blogger Urban Carmel, is stocks fell to new lows on six of the 12 past instances. On another four occasions, the market low was retested but not broken. In another words, stocks look poised to gain, but don’t be surprised if there’s another nerve-racking market descent.