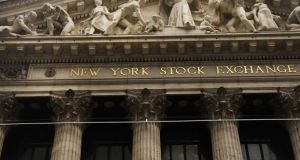 Why are stocks gaining in the face of mounting economic uncertainty? Photograph: Spencer Platt/Getty Images

There’s an old cliché that markets hate uncertainty. So why, one might ask, are stocks gaining in the face of mounting economic uncertainty? Mentions of uncertainty in the US Beige Book – a summary of general economic activity published by the Federal Reserve eight times a year – hit their highest level in at least four years, LPL Research noted last week.

Similarly, the ongoing US government shutdown hasn’t been ignored, with volatility in stocks exposed to government revenue increasing sharply. Importantly, the equity risk premium – the spread between the S&P 500 earnings yield and the yield available from risk-free government bonds – is at 3.6 per cent. That’s well above average levels (2.3 per cent) and shows investors want much higher returns than usual to risk owning stocks.

In short: yes, markets don’t like uncertainty. Stocks were poised to rebound after overshooting to the downside during the Christmas panic, and clearly have room to keep rising if the outlook begins to look less uncertain.

It’s becoming increasingly obvious the European economy isn’t in good shape, but European investors can nevertheless look forward to strong stock returns this year, according to Citigroup. Yes, the data has been pretty awful lately.

Firstly, the valuation gap between Europe’s cheapest and priciest companies is now near levels seen during the financial crisis, suggesting a lot of bad news is now priced in. Secondly, negative economic surprises have indeed been piling up.

Often, that can mean trouble is ahead. However, Citi’s Panic/Euphoria model indicates US sentiment is currently at decidedly ugly levels. In the past, this combination of negative European economic surprises and panicked US sentiment has augured well for future stock returns – more than 20 per cent in Europe over the following year, with stocks rising over 90 per cent of the time.

The second anniversary of Donald Trump’s inauguration passed last week. Given that Trump has long viewed the stock market as a scorecard on his administration, how does its performance over the last two years compare to those of other presidents? Despite the market weakness in recent months, the S&P 500 nevertheless gained almost 25 per cent over Trump’s first two years.

That’s perfectly respectable, but unremarkable – Trump ranks 10th out of the last 23 presidents in terms of percentage gains, according to MarketWatch data, and way behind his predecessor (stocks soared 71 per cent in the first two years of the Obama presidency). It’s a daft game, of course. Multiple factors determine market returns and the president’s role is generally pretty minor in the scheme of things.

The reality is stocks can gain in lousy economic environments and tank during good times. The US administration’s focus on stocks is “bizarre”, said Stifel strategist Barry Bannister last week, and suggests a “complete misunderstanding of how the stock market works”.

Rallies tend to peter out during bear markets but some technical signals suggest the recent rebound may have legs. LPL Research strategist Ryan Detrick notes the S&P 500 recently enjoyed four consecutive weeks of gains of 1.5 per cent or more. Looking at similarly strong four-week stretches in the past, Detrick found stock returns over the following eight- and 12-week periods were twice as strong as usual.

Similarly, technical strategist Jonathan Krinsky is impressed by the breadth of the recent advance. Recently, 71 per cent of stocks were trading at four-week highs – the highest reading since the major market bottom of October 2011. Krinsky crunched the numbers to see what happened following similarly strong readings in the past. A year later, stocks were higher every time.