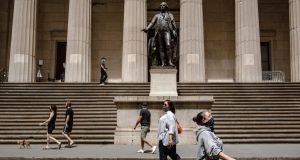 Global stocks are looking increasingly pricey. After rallying almost 40 per cent, the MSCI World Index is now just 9 per cent below February’s all-time highs. Consequently, the median price/earnings ratio of 23 countries tracked by Bespoke Investment Group is now 18.9 – higher than 88 per cent of readings over the past decade.

Relative to history, valuations look especially elevated in Germany; today’s valuation is higher 99.7 per cent of days over the last 10 years. It’s a similar picture in Japan (98.6), the United States (96.8) and Spain (89.8).

The good news, however, is that long-term valuations for non-US markets look less challenging if one examines Cape ratios, which average earnings over 10 years to smooth earnings fluctuations. The US market is dominated by the high-margin technology sector, whereas relatively unprofitable financials are more prevalent in non-US markets.

The latter still look a better bet even if one accounts for sector weights. According to TopDownCharts, developed markets outside the US trade on a Cape ratio of 18, compared with 29 in the US.