Stocktake: Pandemic has not been a ‘billionaire bonanza’

Strong case for reducing inequality, but cherry-picking numbers is disingenuous 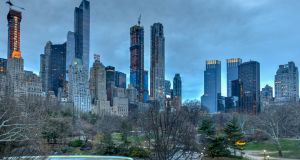 ‘Fortunes rise from the bottom’ is a tautology, not news’. Photograph: iStock

Billionaires have gotten richer in recent months. Should that really be a cause for outrage?

America’s billionaires have seen their wealth increase by 20 per cent since the start of the pandemic, according to a new report by Americans for Tax Fairness (ATF) and the Institute for Policy Studies (IPS). The report dates the pandemic back to March 18th, when the US began to shut down.

Of course, the stats would look very different if they chose February 19th as the starting date. Stock markets peaked that day and crashed over the following weeks before bottoming on March 23rd.

In other words, billionaires lost lots of money and then regained most of it as stocks rebounded – hardly a “billionaire bonanza”, as the IPS put it in an earlier report.

Similarly, the IPS had previously complained about “pandemic profiteers”, noting 34 of the 170 wealthiest US billionaires had seen their net worth increase by “tens of millions of dollars” between January and April. No reference is made to the remaining 136, who presumably didn’t fare so well.

You can make a strong case for reducing US inequality, but cherry-picking dates and numbers is disingenuous. To quote AQR money manager Cliff Asness: “’Fortunes rise from the bottom’ is a tautology, not news”.

1 Should I switch bank now with Ulster Bank at risk of closing?
2 Tick all the right boxes when it comes to your house insurance
3 Belfast mailbox address used by account holder in Russian money-laundering scheme
4 Aldi and Lidl at back of queue during UK pandemic
5 EU watchdog calls for end to Covid loan payment breaks
6 ‘I have three children and a dog, so I feel like a bit of a human ATM’
7 Finance Ireland refinances mortgages with low level of payment breaks
8 Will brother’s widow get half of our parents’ estate when they die?
9 Isme to support legal action against pension tax relief limit
10 Swiss drug giant Roche pays €380m for Irish biotech Inflazome
Real news has value SUBSCRIBE
Save money on international transfers