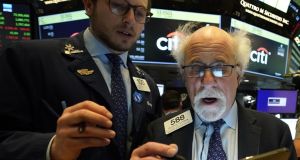 Traders work on the floor of the New York Stock Exchange. Photograph: Timothy A Clary/AFP

The recent market strength has been something to behold. Last week, an astonishing 97 per cent of S&P 500 stocks were trading above their 50-day moving average, the highest reading in history. The index has gained almost 40 per cent in the 50 trading days that followed the market bottom on March 23rd – the biggest 50-day gain in history, according to LPL Research’s Ryan Detrick. The big tech stocks are leading the way, but most stocks are participating in the rally, with 68 per cent of stocks hitting fresh 20-day highs last week – one of the highest readings in history, according to Strategas.

Clearly, stocks are technically overbought. However, while the breadth data is “short-term climactic”, it is long-term bullish, says Strategas, with stocks tending to post above-average gains over the following six and 12 months. That’s echoed by Detrick, who looked at the seven other largest 50-day gains. Six and 12 months later, stocks were higher every time, posting median gains of 9.1 and 19.4 per cent, respectively.