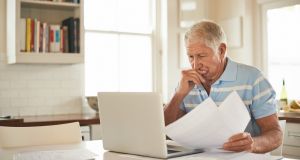 Spending by single retirees declines considerably more than spending by retirees belonging to two-adult households where the second adult is not working, new research by the Economic and Social Research Institute has found.

But spending by single retirees plummets by about 30 per cent due to lower spending on meals outside the home, leisure and holidays.

The ESRI’s analysis also points to gender differences, with declines in leisure and holiday spending only apparent among single male retirees. These two categories alone account for almost two-thirds of the overall reduction in spending among male retirees.

“This is potentially concerning as it may point towards social isolation in retirement,” said research authors Paul Redmond and Seamus McGuinness.

While all household types experience lower spending on meals outside the home, expenditure on food consumed at home is unaffected, they found.

The authors said the research highlighted that certain groups of retirees may experience significant changes to their spending patterns.

“Some of this spending, such as meals outside the home and clothing, may be attributable to a reduction in work-related expenses and therefore is not cause for concern,” they wrote.

“However, single male retirees spend significantly less on leisure, holidays and meals outside the home when they retire. This may be of concern, as it appears consistent with a separate strand of literature showing men are particularly at risk of social isolation in retirement.”

The study concludes that policies to maintain social support and encourage social participation in retirement could help mitigate these effects, as could programmes that better prepare retirees for the transition from employment to retirement.

The ESRI notes that it is a policy priority of the Government’s 2018 roadmap for pension reform to ensure that people can maintain a reasonable standard of living in retirement. However, there is “a significant amount of evidence” showing that spending often declines when people retire.