Q&A: Why are Irish interest rates among the highest in the EU?

Ireland has average mortgage rate of 3.04% compared to EU average of 1.79% 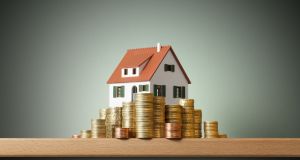 Irish mortgage customers are paying about €250 more every month than their euro zone peers as a result of higher interest rates. Photograph: iStock

Figures released by the Central Bank of Ireland on Friday showed that mortgage interest rates in the Republic are amongst the highest in the euro zone.

For some time, Ireland has topped the league table but in the latest survey, Greece came in first with Ireland dropping to second place.

Still, with average interest rates here standing at 3.04 per cent, we are 1.25 per cent higher than the euro zone average of 1.79 per cent.

Why are interest rates here so high?

The reason we are so much higher than our euro zone peers is down to the fact that enforcing security on a mortgage is both more difficult and less common here than elsewhere.

Seizing a property, usually as a result of mortgage arrears, remains controversial as we recently saw in the case of a house in Roscommon that was subject to a repossession order.

But why does that make a difference?

If a bank can’t repossess a property in which a mortgage holder hasn’t been paying down the finance, lending becomes less attractive here. Because of the lack of certainty for banks, lending for residential property could be viewed as being less profitable.

Additionally, with a substantial volume of non-performing loans still on bank books, they have to hold capital in relation to the loans they make. This means a bank must have assets that can absorb losses if something goes wrong.

Why is this the case?

As a result of the financial crisis, regulators now try to ensure that capital levels are high enough to absorb any likely losses so that future bail-outs can be avoided.

Because of the higher level of non-performing loans in Ireland, coupled with rules from the European Central Bank, Irish banks now hold higher capital levels than they did 10 years ago.

Nevertheless, difficulty in enforcing a repossession order on a mortgage in severe arrears causes greater losses on non-performing loans.

That leads to greater provisioning and capital requirements and so on.

What does the European Central Bank (ECB) think?

At an Oireachtas committee toward the end of last year, ECB president Mario Draghi said the higher mortgage rates are down to the fact the State has a “quasi-monopoly” banking market that is “not competitive”.

AIB and Bank of Ireland control about 60 per cent of the Republic’s mortgage market, not helped by the retreat of boom times banks like Bank of Scotland (Ireland) and Danske Bank.

“If the Government can take action to reduce the degree [of] the presence of a monopoly, that would be welcome,” Mr Draghi said at the time.

Does anyone agree with him?

To some extent. Brendan Burgess, of the consumer forum Askaboutmoney. com, said an Irish customer with a €200,000 mortgage is paying about €250 more every month than their euro zone peer as a result of the higher rate.

“Those politicians and debt campaigners who call for a ban on home repossessions and who threaten to protest outside every eviction should realise that their irresponsible behaviour is imposing an additional cost of about €3,000 a year on responsible borrowers,” he added.

In November, Davy analyst Diarmaid Sheridan said one of the biggest turnoffs for any bank looking at the Irish market is that fact that it is difficult for lenders to get hold of a home with the borrower in default.

Indeed the size of the market, where less mortgage business is written in a year than in a month in the UK, isn’t that attractive for potential new entrants.

Is the government doing anything to change this?

Irish authorities ultimately decided that wholesale repossessions would not be tolerated even as borrowers defaulted in their tens of thousands during the crisis. And while that maintained a level of social cohesion, higher mortgage rates are the result.

If we are happy to continue with that approach, then mortgage rates will always be slightly higher.

The Government is promising that new legislation this year will increase the protection on the family home by widening the factors which courts must take into account in repossession orders.

The impact of this on new cases remains to be seen.

1 Why is Germany suddenly embracing its inner Keynesian?
2 Irish whiskey sales near milestone of 12m cases a year
3 Passengers face queuing in car parks at Dublin Airport
4 Major credit union plans to limit savings accounts to €40,000
5 Prospect of foreign travel highlights remaining restrictions here
6 Emirates to restart flights from Dublin to Dubai this month
7 Angela Merkel sweeps in to save the euro zone
8 Should my mam wait for house prices to drop before buying?
9 Covid economic stimulus, mortgage requests, insurance calls and job lay-offs
10 Builders may end up in complex disputes following suspension of most construction
Real news has value SUBSCRIBE
Save money on international transfers