Stocktake: Are we in a real bear market? 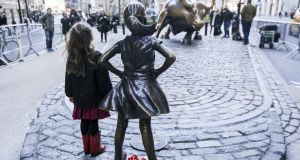 The S&P 500 fell almost 10 per cent in December alone, its worst close to a year since 1931 and its worst monthly performance since the global financial crisis in February 2009. After nine years of gains, have stocks finally fallen into a bear market?

A pedant might say: not just yet. The S&P 500’s closing price on Christmas Eve was 19.8 per cent lower than September’s all-time high, just shy of official bear market territory, only to soar higher over the following days.

Still, stocks were 20 per cent lower at Christmas Eve’s intraday low. Additionally, the tech-heavy Nasdaq and small-cap Russell 2000 are in bear markets, notes LPL Research, while the average S&P 500 stock is also down over 20 per cent. That makes the current environment “feel like a bear market, especially when considering the ferocity of the December sell-off”.

Definitions aside, many investors would argue the duration of market declines are as important as their depth. “If there’s no recession, to me it’s a buyable correction”, says Leuthold strategist Jim Paulsen. “They don’t tend to get super deep and they tend to reverse. The whole key is the recession.”

It’s clear investors are increasingly concerned by the economic environment, but most strategists don’t expect a US recession any time soon. If they’re right, then stocks can rebound. If they’re wrong, then further falls are coming.

The market declines are bothering Donald Trump, who kept busy over Christmas by tweeting that it’s all the fault of the rate-hiking Federal Reserve, which does not “have a feel for the market”. Trump was quick to take the credit for market gains during the good times, but the downside of that strategy is it opens him to criticism now stocks are heading south – criticism he is trying to deflect by blaming the Fed.

As a general rule, presidents’ impact on stock markets tends to be overstated. Trump’s case is somewhat different. Taking the credit for a bull market that began in 2009 was absurd, but there’s no denying his corporate tax cuts and deregulatory agenda boosted stocks in 2017.

Similarly, it would be facile to blame Trump for the global market downturn, but it’s fair to say he has made things worse. Trade wars, an unnecessary government shutdown, unprecedented attacks on the independence of the Federal Reserve – less political volatility would surely be welcomed by increasingly nervous markets.

Buying when volatility spikes can be profitable, suggests Nautilus Research. Since 1990, there have been 15 occasions where the Vix exceeded 35 for the first time in a month. Three months later, stocks were higher on 12 occasions, averaging gains of 6.03 per cent – almost three times greater than normal three-month gains.

However, investors should be careful not to assume the worst is over if indices enjoy a strong rebound. Stocks soared almost 5 per cent on St Stephen’s Day and continued to gain in the last days of 2018 but “buying panics tend not to happen in bull markets”, cautions Ritholtz Wealth Management’s Michael Batnick, who notes past episodes have almost always occurred during serious market downtrends. Market nerves were in evidence last Thursday, after Apple’s revenue miss spooked investors, and even bulls concede stocks are likely to remain volatile for some time.

Market sell-offs are part and parcel of investing, but the recent selling has been pretty extreme. At the December low, just 10 per cent of S&P 500 stocks were trading above their 200-day moving average – the lowest reading since the height of the European debt crisis in the autumn of 2011.

Even more notable is the fact that just 1 per cent of stocks were trading above their 50-day average, something only seen only twice over the last decade – during the aforementioned 2011 sell-off and at the height of the global financial crisis in late 2008.

Unsurprisingly, this is now an official market panic, according to Citigroup’s widely followed Panic/Euphoria model. The good news is that it suggests “high probabilities of making money” over the next year, says Citigroup, with stocks typically averaging gains of 18 per cent. The fact the technical action is now reminiscent of 2008 and 2011, however, suggests any ride higher will be a distinctly uncomfortable one.

1 In this strangest of recessions, what happens next for Ireland?
2 Michael O’Leary is the boss you want to lead an airline out of crisis
3 Bank of Ireland sees about 2,000 staff apply for voluntary redundancy
4 Estée Lauder staff at Dublin airport plan further strike action
5 Best Covid-19 ‘influencers’ will avoid hectoring
6 Fortnite owner signs multimillion deal to buy Irish ‘kidtech’ firm
7 Should I switch bank now with Ulster Bank at risk of closing?
8 Ireland’s Covid-19 economy in five graphs
9 Overhaul of lease arbitration regime would be a game changer for retailers
10 Irish company to test vaccines on volunteers deliberately infected with Covid-19
Real news has value SUBSCRIBE
Save money on international transfers