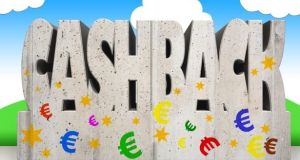 Researchers found that a cashback mortgage could end up costing borrowers €30,000 more over the life of their mortgage due to the higher rates quoted on such products

EBS building society, a subsidiary of state-owned AIB, is pushing for a greater share in the mortgage market after announcing a cashback deal of up to 3 per cent on its mortgage products, in a move which will put it on a level cashback playing field with rival Bank of Ireland.

Cashbacks have been criticised for manipulating customers and costing them more over the long run.

EBS will now offer up to 3 per cent cashback to customers taking out new fixed or variable rate mortgages on their homes in Ireland, and the offer is available to first-time buyers, customers moving to a new home, and customers who wish to switch their mortgage to EBS.

The move means that someone with a €300,000 mortgage, for example, will now get €9,000 back in cash, or €12,000 on a €400,000 mortgage. The lender offers 2 per cent back once the mortgage is drawn down, with a further 1 per cent available after five years. The offer is available until the end of the year. Previously, EBS offered a cashback of 2 per cent.

However, while a number of other lenders, including Bank of Ireland (up to 3 per cent) and Permanent TSB (2 per cent) continue to offer cashback deals, they have been criticised for competing on incentives, rather than rates.

A recent study from researchers at Trinity College Dublin and Indecon Economic Consultants, for example, found that a cashback mortgage could end up costing borrowers €30,000 more over the life of their mortgage due to the higher rates quoted on such products, while younger and less-educated borrowers were seen to be more at risk of choosing these more expensive mortgages.

This follows research in 2017 by the Competition and Consumer Protection Commission, which concluded that cashback deals “represent a sophisticated attempt to manipulate consumer behaviour”.

And last year, Fianna Fáil spokesman on finance Michael McGrath proposed an amendment looking to see if the practice could be banned, as he argued that customers availing of cashbacks can end up paying far more over the long term in higher interest rates.