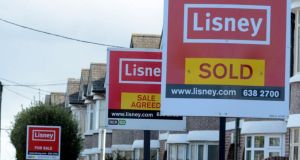 In terms of gifting a property to you, that would not allow your father to sidestep capital gains tax. He would still be obliged to file a CGT return and pay capital gains on the gift. Photograph: Cyril Byrne

My father is 74 and owns three three-bed semidetached houses in Dublin. He bought these at various times, one before the Celtic Tiger and two during its peak years.

We’ve now come full circle with these and, given the fact that he and my mother are getting older, they are now looking to offload them. I’m not sure of the exact finances but I know he remortgaged the first house to raise funds to buy the others. He also owned an apartment which the bank took back.

Most scenarios seem to include a very large capital gains tax bill and, as he has no savings to speak of, paying this would be very difficult if not impossible.

He mentioned gifting one to me but I believe that’s still subject to capital gains? It’s a damned if you do and damned if you don’t scenario. Would greatly appreciate any advice.

It appears your father’s “savings” are effectively in the properties that he has bought over time. That is not a problem per se as long as they have gained in value over the period of ownership which, I gather from your letter, they have.

Clearly, these have been rented over the time he has owned them and I am assuming that all running taxes in relation to rental income are in order.

That leaves just the issue of capital gains tax (CGT).

If he sells them now, there will be a potential CGT liability, assuming they sell for more than he bought them.

You say that two of the properties were acquired during the Celtic Tiger years. While these may be back in the black now, it is unlikely that they will be worth too much more than he bought them for.

There are expenses that you can set against tax on rented property but most of these – such as the estate agent and legal costs incurred both buying and selling, mortgage interest, depreciation of fittings etc – are set against rental income.

And, of course, there is the annual CGT exemption on the first €1,270 of gains crystallised in any year – not that that will get you very far on the sale of a property.

There is also the issue of outstanding losses that your father may have – including on the repossessed property. I’m conscious from your letter that this was a section 23 property and therefore your father may have obtained relief against the purchase price could be set against rental income as relief from tax. However, if the property was sold or otherwise disposed within a set period – a decade, I think – any relief should have been clawed back.

That means there should be some outstanding capital losses available to him on the apartment. However, section 23 is a messy area and, in the lack of any clarity over the relief secured or clawback by Revenue, I would strongly advise you to talk to a tax adviser versed in this area.

All that being said, if your father sells and there is a profit, he will have a tax bill on any gain over and above the €1,270 exemption. It would amount to 33 per cent of any gain.

You say he has no savings but of course by liquidating the properties, he will be getting access to liquid cash. That means paying the tax bill should not be such an issue.

Naturally, if there is any mortgage outstanding on any of the properties, it would need to be settled, which would reduce your father’s cash payment from the properties. However, only the gain between purchase price and sale price is affected by CGT, so funds should still be available. The only real issue is how much when all is said and done.

In terms of gifting a property to you, that would not allow your father to sidestep capital gains tax. He would still be obliged to file a CGT return and pay capital gains on the gift. It would also have potential inheritance or gift tax issues for you but that’s a separate issue.

If your father does want to give you one of the properties, he could do so more tax efficiently by leaving it to you in his will. It won’t affect your gift/inheritance tax position positively or negatively, but it would save him money as capital gains die with the owner and so neither he nor his estate would face a capital gains tax bill on any such bequest made via his will.

1 How to gift your child a house deposit . . . tax free
2 BOI customers to be charged twice with bank fees on New Year’s Eve
3 Ryanair warns it may reduce more Irish services and relocate operations
4 Family in court dispute over hotels in Dublin and Galway
5 Irish start-up which developed facial recognition for cows raising over $50m
6 Stripe in talks for new funding at much higher valuation
7 Irish designer of Oxford vaccine: ‘I’ve never worked so hard in my life’
8 City of London makes late scramble to limit Brexit disruption
9 Willie Walsh appointed head of the International Air Transport Association
10 Workers have little idea of the cost of retirement income
Real news has value SUBSCRIBE
Save money on international transfers