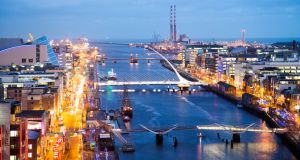 And the rich are going to continue to get even richer – according to the Wealth Report 2017 from estate agent Knight Frank, which says some 24,900 more Irish people will be millionaires by 2026.

The number of multimillionaires with over $10 million jumped by 160 to 2,760, while 50 Irish people entered the hallowed realm of the “ultra-high net worth” (over $30 million). That club now has 890 members.

There were, however, no new Irish billionaires last year, with the figure staying static at five. In the 10 years between 2006-2016, the number of Irish with “ultra-high net worth” grew by 25 per cent.

Looking specifically at Dublin, the report shows that the city is now home to a third of Ireland’s millionaire population, at 28,200, and 1,060 multimillionaires.

Overall, the study shows there was a modest rise in the global population of ultra-wealthy people in 2016, reversing last year’s decline. The data is compiled by market research firm New World Wealth.

However, it is not just the rich that are seeing their situation improve. Figures from the Central Bank show household net worth increased by 3.9 per cent in the third quarter of 2016, with average Irish household wealth now standing at €141,427, largely on the back of rising house prices.

1 How much state pension will I get next year?
2 Up or down – how much is your Local Property Tax this year?
3 PTSB plays down Ulster Bank talk as it sells €1.4bn of loans
4 Housing crisis will be permanent unless there is radical rethink, industry warns
5 Irish tech company Asavie acquired by Nasdaq-listed Akamai
6 Am I crazy to consider switching to an Ulster Bank mortgage?
7 Brexit to curb services trade with UK, accountants group warns
8 How long can Government afford to keep State pension age at 66?
9 Disposable income in Ireland rose 28% between 2012 and 2019
10 Ghost newspapers and zombie brands are stalking the media
Real news has value SUBSCRIBE
Save money on international transfers