Stocktake: Investors should not fear another Black Monday

Stocktake: A cool look at overbought markets and cracks in the global rally 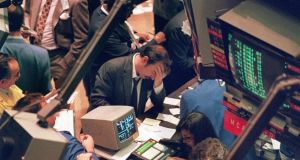 Black Monday, October 19th, 1987. The Dow Jones closing last week over 2,000 points above its 200-day average for the first time ever isn’t as ominous as it appears. Photograph: Maria Bastone/AFP/Getty Images

There’s a lot of chatter about the Dow Jones last week hitting all-time highs on 10 consecutive days, something not seen since 1987 – a year forever associated with Black Monday, when stocks suffered their biggest ever one-day fall. Time to pack up the kids?

Similarly, the Dow closing last week more than 2,000 points above its 200-day average for the first time in history isn’t as ominous as it appears. In percentage terms, it’s trading 11 per cent above its average – that’s high (the highest point since May 2013) but not freakishly so. The more important S&P 500 index is 9 per cent above its 200-day average – again, that’s high, but shy of the 12-14 per cent range that marks a “statistically significant overbought signal”, says Strategas Research Partners.

Indices are technically overbought, but not extraordinarily so; high stock markets can go higher.

Buying not yet at extreme levels

Bearish investors might point to other metrics indicating a buying extreme. For example, Bespoke Investment Group notes the S&P 500 last week traded more than two standard deviations above its 50-day average, something unseen since November 2004.

That sounds scary, but one should ask: what happened afterwards? As it happens, stocks continued to rise, gaining another 4 per cent by year-end. Although oversold markets usually enjoy decent bounces, overbought markets are not always followed by pullbacks.

Besides, most indicators suggest markets are bullish but not euphoric. In percentage terms, the S&P 500 is 3.5 per cent above its 50-day average, with Bespoke noting this reading has been comfortably exceeded on “multiple occasions over the last five years”. Money manager David Merkel notes that the S&P 500’s year-to-date performance ranks 20th out of the last 68 years; that’s good, but not remarkable.

Finally, remember that early-year momentum augurs well for stocks. Stocks gained in both January and February, something that has happened on 27 occasions since 1945. Further gains over the next 10 months followed on 25 occasions, says CFRA Research’s Sam Stovall; for the year as a whole, stocks rose in every single year, gains averaging 24 per cent.

Nothing scary about all-time highs

Despite the bullish stats, the very words “all-time highs” make many investors nervous. This is especially so when every day seems to end with fresh all-time highs. Surely, one might think, such runs are unsustainable?

This perception is understandable. Historically, just 5 per cent of all days have closed at new highs, according to LPL Research’s Ryan Detrick. The S&P 500 has already hit nine all-time highs in 2017 – half the number for the whole of 2016 and almost as many as was seen in 2015 (10).

The rally may feel unsustainable but history suggests the bull market “could actually have plenty of legs left”, says Detrick.

Some cracks in the global rally

Despairing bears and the uninvested might ask: well, are there any signs of a market pullback?

Stocks are expensive, but valuation is a poor timing tool. The obvious red flag recently has been frothy sentiment, although that alone has not been enough to prevent indices from powering higher.

More recently, however, market breadth – the percentage of stocks hitting new highs – has deteriorated, with index strength largely driven by the financial and technology sectors. The waning number of new highs resembles periods in 1997, 2005, 2010 and July 2016, says SentimenTrader’s Jason Goepfert, all of which were followed by pullbacks.

The global picture is similar. European and emerging markets have actually outperformed the US over the last three months, suggesting this is a broad global rally. However, Societe Generale quantitative analyst Andrew Lapthorne points out that although the MSCI World Index is at record levels, just 246 of its 1,650 component stocks have actually hit all-time highs this year. The average stock remains 26 per cent from its high, says Lapthorne, with strong performances from large-cap stocks such as Apple, Facebook and Alphabet masking underlying weakness.

This might change – the laggards may catch up – but traders should be concerned if global breadth continues to falter.