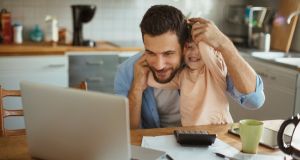 A couple changing tak credits mid-year can involve a big clawback by Revenue from the spouse who was working. Photograph: iStock

Taxes, commuting costs, childcare: it sometimes feels, in relation to finance, that there is no point going back to work after taking a break to rear your young family.

It’s a strange conundrum: you did the sums and figured the family could survive with just one salary. Now you’re considering going back into the workforce, and are left wondering why the sums don’t necessarily stack up in your favour.

Childcare costs, of course, are still the major inhibitor when considering going back to work; but tax is also an issue. So how will you be taxed if you return to the workforce? And will it still make sense?

When one partner in a civil partnership or marriage decides to give up their job to stay at home, typically they will opt to be “jointly assessed” in the tax system. This means the partner earning an income will benefit from higher tax credits/standard rate cut-off point.

But what does this really mean?

Well let’s look at tax credits first. If you earn an income you are entitled to tax credits, which have the effect of reducing the amount of tax you pay. Everyone who works, or gets a taxable social welfare payment, such as jobseeker’s benefit, is entitled to a PAYE tax credit of €1,650 (people who are self-employed are entitled to an earned-income credit of €950 for 2017).

But additional tax credits are also available, and how much you get depends on your circumstances.

For someone earning more than this, the tax credits reduce the amount of tax you owe each year by €3,300.

So far, so clear.

Where it can get complicated is when you are married or in a civil partnership, as you have the option of sharing tax credits and tax bands between you and your spouse or civil partner. When you get married, you can opt to be taxed either as a single person or by joint assessment. Typically it makes sense to be jointly assessed when one spouse earns less than €36,500, and therefore is not using up all of their standard-rate allowance.

In such instances, the spouse who remains in the workforce will typically ask Revenue to adjust their credits so that they are entitled to those of their spouse. An unused personal tax credit (ie from the non-working spouse) will be transferred to the working spouse, thereby reducing their tax liability by a further €1,650. 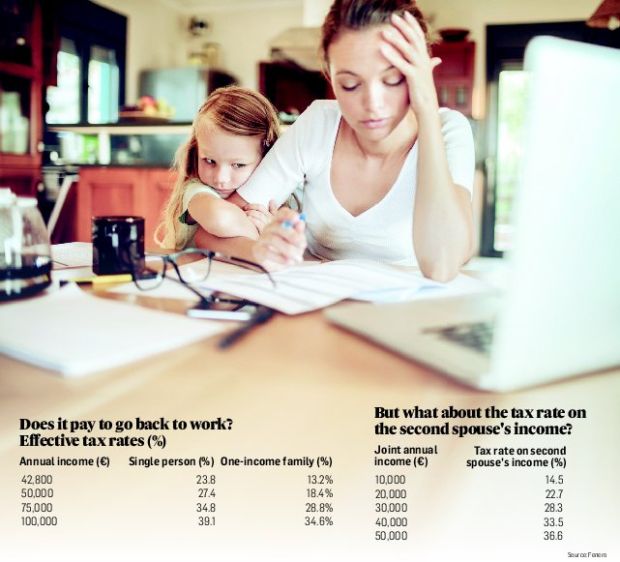 “Ireland is a high-income-tax nation; however, certain married couples with one income don’t fare out too badly,” says David O’Reilly, managing director and head tax adviser at Fenero, noting that couples will pay a mere 13 per cent tax on income of €42,800 when they are a one-income family.

“A single person on the same income would have an effective tax rate of 23.8 per cent, which is a lot higher,” he adds.

Parents who stay at home can also apply for is the home-carer’s credit of €1,000. This can be claimed in circumstances where the stay-at-home partner is caring for a dependent person, such as a child up to the age of 18.

However, not every stay-at-home partner should claim it. It all depends on how much the working partner earns, as you can’t claim the increase in the standard-rate band and the tax credit at the same time.

In practice, Revenue will typically grant the more beneficial treatment.

Tax on return to work

But what happens when you decide to go back to work? As O’Reilly notes, what typically happens is that couples leave tax credits the way they are, as changing mid-year can involve a big clawback by Revenue from the spouse who was working.

The real concern for many people is that if their spouse has all their tax credits as well as benefiting from the higher standard rate allowance, will all of returning partner’s income be taxed at the higher rate?

Thankfully the answer is no. Two people singly assessed can each earn up to €33,800, or €67,600 combined, before starting to pay tax at the higher rate of 40 per cent. If only one spouse is working, they’re availing of a higher – but not as high as it could be – cut-off point of €42,800. This leaves a further €24,800 which the spouse or partner returning to work can earn and pay tax on at a rate of only 20 per cent.

But it is true that the “second parent”, with only their PAYE tax credit, will start paying tax earlier.

“This means they start paying income tax on any income received over €8,250,” says O’Reilly. And it means that anything they earn over €24,800 goes straight into into higher tax band. And, thanks to the USC and PRSI, this means a tax rate of 49 per cent on earnings over this level.

“So nearly half of their income is being taxed,” he says, noting that many clients are “horrified” to learn this when contemplating a return to the workforce.

In the absence of rebalancing tax credits the second earner’s “effective tax rate” – ie the rate of tax they pay on all their income starts rising faster than either a single person’s or that of the main earner in the couple.

Of course, the couple’s effective tax rate still remains relatively low (as the other parent is benefiting from tax credit/broader standard band), but you can see how going back to work can be less attractive.

According to O’Reilly, the disincentive really starts to kick in on earnings of more than €40,000.

If you’re a single parent, you’ll also be entitled to a greater standard-rate tax band than someone with no children. A one-parent family, for example, can pay tax at the lower rate of 20 per cent on earnings up to €37,800 – higher than that allowed for a single person (€33,800), but still less than a couple will get (€42,800).

Single parents are also entitled to an additional tax credit, worth €1,650 a year.

“It’s very beneficial in order to support people to go back to work,” says Valerie Maher, programmes and policy manager with One Family, a support organisation for one-parent families. However, since 2014 this credit has been available only to the parent with custody – and not both parents, as had previously been the case. Moreover, how the credit is administered can cause difficulties.

As Maher notes, if a woman with custody of her children is not working, and therefore not earning an income, she can’t claim the credit. She can, however, as the “primary” claimant, transfer the credit to the father of her children, in this instance the “secondary” claimant, once they meet certain eligibility requirements.

If she then decides to go back to work, she can take this credit back from her former partner but it won’t come into effect until the following January. So if she goes back to work in March 2017 she won’t benefit from the credit until January 2018.

“It’s like a member of the public is in control of another person’s tax credits,” says Maher. And if the mother is the primary claimant, and she starts living with a new partner, neither she nor her former partner can claim the credit.

Then, if the mother wants to go back to work for example, she can take back her credit but it may be at the expense of her former partner’s tax bill.

“The father will be down up to €48 a week, depending on how much they’re earning,” says Maher. And it can also be a difficult conversation to have in what might already be a difficult relationship, which means that some mothers may be loath to give the credit to their former partners in the first instance.

“Neither primary nor secondary claimants are comfortable with the way its administrated at the moment,” says Maher, adding that anecdotally there is evidence that some parents have threatened to withhold maintenance payments unless they are granted the tax credit.

“It shouldn’t be allowed to be used as a weapon: the State should intervene and make a choice,” she says.