From market meltdown to melt-up: lessons from 2016 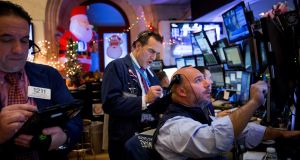 It has proved to be an eventful year in financial markets. Fears of global deflation led the S&P 500 to suffer its worst start to a year in history, but a strong recovery subsequently took hold.

That recovery withstood the shock Brexit referendum result and only gathered speed after the second political surprise of 2016 – the US presidential election victory of Donald Trump.

Investors won’t forget 2016 in a hurry, and nor should they – more than most years, it holds valuable and timeless investor lessons.

You can expect to come across plenty of market forecasts for 2017 in the coming weeks, but 2016 has proved that forecasting is a tricky business.

How many people looked into their crystal ball 12 months ago and forecast that Britain would vote to leave the EU and that Donald Trump would win the race for the US presidency?

How many analysts, when assessing the potential impact of the above mentioned events, predicted that markets would hit all-time highs within days of the Brexit result, or that US markets would enjoy their best week in five years following Trump’s victory?

Last January, RBS was warning that oil prices would continue falling all the way to $16 as global deflation took hold.

Predictions of sub-$20 oil prices were also made by Goldman Sachs and Morgan Stanley.

Today, oil is near 16-month highs, with market observers expecting $60 oil prices sooner rather than later.

The consensus now is that 2017 will be a year of reflation and continued political populism, with analysts compiling detailed reports as to what asset classes are best positioned to benefit.

It’s worth remembering, however, that consensus opinions can quickly change.

A year ago, Goldman Sachs released its top six trade ideas for 2016. Within a month, the bank was forced to abandon five of them.

To repeat: forecasting really is a tricky business and 2017 is likely to be no more predictable than 2016.

The subject of political risk has dominated market coverage in 2016, and many commentators have been puzzled by the resilience shown by financial markets following unexpected or unwelcome political developments.

“They shrugged off Donald Trump’s election in a single day. They shrugged off the Italian referendum result in a couple of hours. Heck, in this mood, they would shrug off an alien invasion of planet Earth.”

In truth, by moving on swiftly following political shocks, markets are largely following the historical script.

Indices tanked following the 9/11 attacks in 2001, only to recoup their losses within 19 days.

Stocks plunged when John F Kennedy was assassinated in 1963, but markets had regained all of their losses within two days.

S&P Capital IQ data shows that so-called “shocks to the system” tend to be brief affairs, with markets recouping their initial losses within an average of 14 days.

No doubt, the subject of political risk, whether it pertains to the actions of US president-elect Trump or the rise of political populism and anti-EU sentiment in Europe, will occupy investor minds again in 2017.

Long-term investors shouldn’t lose sleep, however; the effect upon stock prices will likely be a fleeting one.

Some naïve souls like to devour the daily notes of market analysts, believing that doing so will help them to anticipate markets’ next move.

But strategists can be a promiscuous bunch, sometimes confidently prognosticating market outcomes only to perform a swift U-turn that completely contradicts their earlier outlook.

Prior to November’s US presidential election, the consensus was that a Trump victory would hit stock markets badly.

The uncertainty caused by a Trump presidency could trigger a global recession and a market correction, warned Citigroup.

Goldman Sachs said markets would focus on “trade-related issues”, with “heightened uncertainty” a “short-term negative for risk assets like equities”.

The uncertainty could drive a “knee-jerk rally” in gold prices, warned Société Générale.

Citigroup changed its recommendation on global equities to overweight from underweight, with Bloomberg reporting that the firm “views the 72-hour-old rotation into stocks following Donald Trump’s presidential victory as the start of something big”.

JPMorgan said the rally had legs as the election outcome was “pro-growth for equities”.

Goldman said tax changes could boost its earnings estimates by 8 per cent.

This happens all the time – something that was meant to be a cause for concern becomes a cause for celebration, and vice-versa.

Market prices drive market sentiment, not the other way around. Fickle analysts are left racing to catch up with the latest consensus.

Bad call of the year must surely go to RBS analyst Andrew Roberts, who advised investors to “sell everything” during the market panic in January, warning that 2016 would be a “cataclysmic” year for investors.

Roberts’ hyperbolic note made headlines across the world, with few commentators bothering to point out that he had been issuing similarly inaccurate and apocalyptic warnings as far back as 2010.

The problem isn’t simply that this was money-losing advice; it would have been bad and irresponsible advice even if markets did go on to suffer a “cataclysmic” year.

Firstly, investors cannot hope to avoid corrections and bear markets, which are an unavoidable feature of financial markets and part and parcel of the long-term investing game.

Secondly, anyone who warns of catastrophic market falls should acknowledge that he is betting against history.

Most of the time, stock markets rise.

If you sell up every time a dire market warning is issued, you will miss the occasional hairy moments, but don’t forget that the good times typically outweigh the bad times.

Good investors are not focused on avoiding bear markets: they take the long view, which means accepting and looking past them, all the while remembering that most of the time, the worst-case scenario doesn’t come to pass.

Knowing and doing are two different things, however.

The sell-off that climaxed in early February was an opportunity for long-term investors to put some money to work.

The MSCI All-World Index had fallen into a full-blown bear market (that is, a fall of at least 20 per cent). In my February 16th StockTake column, I cited research from investment strategist and blogger Ben Carlson, who had analysed the 10 global bear markets that had taken place over the last 45 years.

A year later, noted Carlson, stocks were higher on all but two occasions, gaining an average of 20 per cent.

The MSCI All-World has gained 20 per cent since its February bottom.

Unfortunately, investors acted as if this time would be different.

Fund managers were completely spooked in February, with Merrill Lynch’s monthly fund manager survey showing institutional investors were holding more cash than at any time since 2001.

Today, the mood is different. Among ordinary investors, optimism has been above historical averages for four consecutive weeks, the longest streak in nearly two years.

When stocks got cheap, no one wanted to buy.

Now, following a 20 per cent rally, everyone wants to buy. Human nature, alas, continues to cost investors a lot of money.

1 Google tells workers to return to country where they are employed
2 Sean Quinn stunned at rebranding of Quinn Industrial Holdings
3 Probate is changing: What does that mean for you?
4 Will tracker mortgage be at risk if Ulster Bank closes?
5 Whistleblower warned EY of Wirecard fraud four years before collapse
6 Three Ireland switches on 5G network around the country
7 Seán Quinn on rebrand, Irish golf tourism wipeout, and probate changes
8 Me & My Money: ‘Money can’t buy you happiness but it can make life a lot easier’
9 Cliff Taylor: Jobs crisis set to be lingering legacy of Covid-19
10 Landlords accuse New Look fashion group of exaggerating insolvency
Real news has value SUBSCRIBE
Save money on international transfers