Where are the female fund managers?

Just one in nine fund managers in Ireland is a woman, and the problem is getting worse worldwide 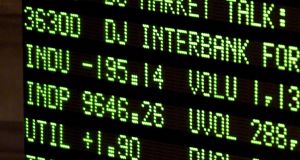 Globally just one in five fund managers is female. The figures in Ireland are even worse, with just one in nine funds being run by a woman.

The few women who do run funds tend to be given less responsibility than their male counterparts. Why is the world of fund management an almost woman-free zone?

The figures come from a new Morningstar report which details startling levels of under-representation for women in the global fund management industry. Examining more than 26,000 funds across 56 countries, Morningstar found that about one in five fund managers is a woman, a management rate “largely unchanged since 2008”.

This scarcity is evident everywhere “regardless of geography” – even in the highest-ranked country (Singapore) just 30 per cent of managers are women.

The figures in Ireland (11 per cent) are way below the global average, although Ireland is not exactly an outlier. Britain (13 per cent) is not much better, while the figures are even lower in the US (10 per cent) and Germany (9 per cent).

Even in famously progressive Scandinavia female fund managers are a rarity – women account for just 12 per cent of fund managers in Sweden and Norway and 13 per cent in Denmark and Finland.

Firstly, Morningstar found that female fund managers are more likely to be chartered financial analysts (CFAs) and tend to be more qualified for the role than men. Secondly, various studies have indicated that women tend to be better investors than men.

In particular, Morningstar notes that women are less likely to trade their positions. This trend is “remarkably consistent through time” – during downturns women are more likely to hold on to their investments, while they are “less likely to be looking for quick wins” during strong markets, indicating “higher conviction” in investment decisions.

“This invest-with-conviction approach that we observe among women may be especially beneficial for active managers, which increasingly face cost scrutiny and largely have underperformed passive funds with a conventional higher-turnover approach,” the report says. Nevertheless, the active fund industry appears to think otherwise, judging by the paucity of female managers in its ranks.

Recently there have been efforts to shatter the idea that fund management is inevitably the preserve of middle-aged men. In June, 27 financial organisations, including major fund houses such as Allianz Global Investors, Fidelity International and HSBC Global Asset Management, came together to launch the Diversity Project, the aim being to solve low diversity levels “once and for all”. In August, the world’s largest fund management firm, Blackrock, agreed to share data showing how many women it employs in senior roles, and several other big industry players have vowed to do likewise.

Many commentators suggest the diminished reputation of the sector since the 2008 global financial crisis has made it a less popular career choice among women, although that neglects the fact that female under-representation is hardly a new development.

Some research shows there is an aversion to women out-earning their partners, with lower marriage rates and higher divorce rates reported in such instances. Still, while this may be a factor, it doesn’t explain why female representation is much higher in other well-paid industries such as medicine and law.

Another factor is implied in a research paper entitled Do Women Shy Away from Competition? Do Men Compete Too Much?. The researchers found that even in areas where women clearly perform as well as men, they are much less likely to choose a competitive setting, more likely to underrate their performance, and more averse to the idea of receiving feedback on their relative performance.

This consequently “decreases the chance of women succeeding in competition for promotions and more lucrative jobs”.

Old-fashioned discrimination is also likely to play a part. As mentioned, the Morningstar report noted that less responsibility is given to female fund managers despite the fact they are more likely to be qualified for the role and more likely to be CFAs. Women may “need to be more credentialed than men to win a fund-management role, reflecting a potential hiring bias”, the report noted.

Other studies on the role played by gender during the hiring process have found that men are more likely to boast about their performance while women tend to underestimate their performance. This “makes it tougher for women to win leadership roles”.

Conscious of the obstacles they face, women may be more inclined to work towards the CFA designation to provide “tangible proof” of their “readiness for the job”.

According to a report by investment consultancy Mercer, mid-career women in financial services are 20 to 30 per cent more likely to leave their employer than their counterparts in other industries. Workplaces are too inflexible regarding working options and family support; there is a perceived lack of transparency and fairness around promotion and pay processes; the culture in financial services is seen as containing “persistent sources of low inclusion”.

The financial industry, adds Morningstar, “may be less tolerant of career interruptions, which are more typical for women” and may be “less conducive to balancing career and family”.

Most if not all of the aforementioned factors likely play their part in explaining why women are so chronically underrepresented in fund management. But whatever the explanation the figures are embarrassing for the industry.

In 2009, 14 per cent of fund managers in Ireland were women, compared to 11 per cent today. In the US the percentage of female fund managers has either slipped or remained stagnant in each of the last eight years.

In most geographic regions, says Morningstar, the odds of a woman managing an equity or allocation fund today are even lower than the minuscule rates reported nine years ago.

Following an address at an industry event in June, high-profile Allianz adviser Mohamed El-Erian said he was “shocked by the number of white men in the audience”. The Morningstar report confirms that El-Erian’s audience was not an atypical one; the traditional image of the fund management industry as an old boys’ club is alive and well.

Cities are too resilient to be killed by Covid 11:53
Google to lease extra 70,000 sq ft of London office space 10:39
IAIM saw lobbying as key to CEO role taken by D'Arcy 10:01
Hibernia Reit seeks occupier for final place at the Windmill Quarter 09:54
Flexible foothold in Dublin’s south docklands at rent of €52.50 per sq ft 09:53