Will the ‘Trump bump’ be followed by a market melt-up?

Much is made of the recent spike in bond yields, but bonds had bottomed last July 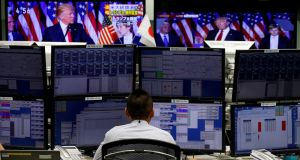 Trump bump: this is not a short-term bout of euphoria triggered solely by Trump’s surprise election victory – markets have been getting into gear since the summer. Photograph: Toru Hanai/Reuters

The US stock market has been largely range-bound over the last two years but sentiment has picked up noticeably since last month’s presidential election. With the “Trump bump” resulting in the four main US equity indices hitting simultaneous all-time highs for the first time in 17 years, might a market melt-up be in the offing?

Promises regarding lower corporate tax rates and deregulation are also being lapped up by equity investors, adding to the growing conviction that many more all-time highs will be registered in the coming months.

It’s important to note that this is not a short-term bout of euphoria triggered solely by Trump’s surprise election victory. Markets have been getting into gear since the summer, buying into an inflation narrative that was “nascent leading up to Trump, and he just turbocharged it”, as Aberdeen Asset Management’s James Athey put it recently.

Much has been made of the recent spike in bond yields, with 10-year US Treasury yields rising from 1.86 per cent prior to the election to 2.35 per cent last week. However, bonds had bottomed as far back as July, when they hit an all-time low of 1.32 per cent.

Similarly, while bank stocks – obvious beneficiaries of a reflationary environment – have soared lately, their relative rise had begun months earlier, ending years of underperformance. The same is true of small-cap and cyclical stocks, which had lagged behind defensive and yield-centric stocks until reversing course in recent months.

The long earnings recession had already ended prior to the election, with fourth-quarter earnings expected to be the best in two years, while markets had also noted improved US and Chinese economic data.

Fund manager surveys had consistently shown a desire for more expansive fiscal policies; with the merits of fiscal stimulus stressed by both Trump and Hillary Clinton, a growth mindset had already taken root in financial markets. These market moves have accelerated in recent weeks, but sub-surface changes have been evident for some months now, indicating real conviction in the belief that higher growth, higher inflation and a new market environment is finally around the corner.

The idea of a successful fiscal reflation is now mainstream, as evidenced by the sudden about-turn in investor sentiment. Fund managers, cautious throughout 2016, have been busy putting their cash to work, with Merrill Lynch’s most recent monthly fund manager survey revealing the largest month-over-month drop in cash levels since August 2009.

Even more notable, perhaps, is the upturn in retail investor sentiment. The current bull market, now almost eight years old, has not been embraced by ordinary investors. Burned by two vicious bear markets in 2000 and 2007, they have long been sceptical, with American Association of Individual Investors (AAII) polls showing that bullish sentiment had been below historical averages for a record 54 weeks.

That run has ended. Bullishness was at strikingly low levels immediately prior to the election, but the AAII says optimism is now at “unusually high” levels, having more than doubled in two weeks – the biggest two-week gain in more than six years. Typically late to bull markets, recent data suggests animal spirits may finally be stirring among retail investors, potentially catalysing further market gains.

Bull markets end when everyone is already invested in equities, not when risk-averse investors have a pile of cash sitting in low-yielding assets. It’s possible, says blogger and Ritholtz Wealth Management strategist Ben Carlson, that a “massive shift in investor allocation preferences” could take place, one that could “potentially take the stock market into bubble territory”.

Since the current bull market began in March 2009, he says, some $1.34 trillion has made its way in to US equity funds. However, $1.55 trillion has flowed into bond funds. That more money has gone into bonds than stocks during one of the greatest equity bull markets in history, says Carlson, shows that the “scars from the financial crisis still run deep”. However, a “violent” reversal has lately taken place, as Merrill Lynch noted recently, with global bonds suffering the largest weekly outflows since June 2013 and US equity fund inflows hitting two-year highs.

This reversal has fuelled speculation that the long-awaited great rotation out of bonds and into stocks may finally be at hand.

Some especially enthusiastic bulls see resemblances between the current environment and the early years of Ronald Reagan’s presidency. Stocks soared during Reagan’s presidency, an era characterised by tax cuts, deregulation and rising deficits.

However, today’s environment is very different in some key respects, as noted by Gluskin Sheff strategist David Rosenberg last week. Bond yields are currently 2 per cent and rising, said Rosenberg; in 1981, they were 15 per cent and falling. Reagan had much more fiscal room, inheriting an economy with a federal debt-to-GDP ratio of 30 per cent compared to 77 per cent today.

Most crucially, stocks had gone nowhere between 1965 and 1981; stocks were dirt cheap, setting the scene for the 18-year bull market that finally topped out in 2000. In 1981, stocks traded on eight times trailing earnings, compared to a ratio of 20 today. The S&P 500’s cyclically-adjusted price-earnings ratio was around eight in 1981; today, the index trades on 26 times cyclically earnings, a level exceeded on just a handful of occasions over the last century.

Forget Trumpmania, says money manager John Hussman, who warns that the effect of politics on long-term market outcomes is “negligible, compared with the impact of valuations”.

Hussman is notoriously bearish, but even market bulls would agree valuation multiples have little room for further expansion. The S&P 500 trades on 16.6 times forward earnings, according to FactSet – close to the highest levels recorded over the last 10 years, and well above its 10-year average of 14.3.

Stocks more than doubled during Reagan’s presidency and recorded almost identical gains during Barack Obama’s reign, but both men came to power when stocks were near generational lows. In contrast, stocks have more than tripled since March 2009, gaining in every single year.

Notwithstanding the current enthusiasm regarding the Trump bump, history would suggest that long-term returns are likely to be muted, given today’s valuations.

Still, pricey markets can get a lot pricier. The classic late-stage bull market phase is characterised by investor exuberance and big price gains, with giddy investors driving stocks to heady levels. Technically, markets look healthy. Market breadth has been solid, as evidenced by the fact that the four main market indices – the S&P 500, the Nasdaq, the Dow Jones and the small-cap Russell 2000 – have all been hitting all-time highs. Additionally, markets have come through a lengthy consolidation period, having been stuck in a relatively narrow trading range for much of the last two years. This summer’s breakout to fresh highs always looked telling, indicating a growing conviction regarding improving economic and corporate fundamentals.

Valuations aside, bears can point to two obvious flaws in the bullish reflation thesis. One, Trump may not be able to deliver on his fiscal stimulus plans. Two, his plans, even if delivered, may fail to spark the desired growth.

However, clarity as to the exact impact of the new economic regime is unlikely to emerge for some time. Until that clarity does definitively emerge, it seems wise to respect the recent rally and assume that markets will continue to give the bulls the benefit of the doubt.

A 2017 market melt-up is not a given, but it’s beginning to look like a real possibility.