Asked about the possibility of Brexit in April, the ‘bond king’ said it would not happen 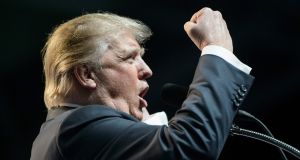 Donald Trump: some pundits who predicted a Trump victory have been lauded as Nostradamus-like visionaries, even if their predictions were only half-right. Photograph: Brendan Smialowski/AFP/Getty Images

If you have to forecast, American economist Edgar Fiedler once quipped, forecast often. If you get a big call right, it will never be forgotten. And if you’re wrong, well, who’s keeping score?

Not the financial media, as is evidenced by recent coverage surrounding Donald Trump’s surprise presidential election victory. Few investors predicted a Trump victory, but billionaire bond manager Jeffrey Gundlach was one of the exceptions, predicting on a number of occasions this year that Trump would win and that bonds would sink as markets belatedly priced in Trump’s reflationary policies.

Gundlach, the founder of DoubleLine Capital, which manages more than $100 billion, has a reputation for prescient investment calls. The latest so-called “bond king” is widely regarded as one of the world’s top investors, and his reputation has been burnished by recent events, with commentators lining up to acclaim Gundlach for his contrarian call.

“So when Gundlach said ‘I told you so’ after the election, he was absolutely right,” wrote Bloomberg columnist Lisa Abramowicz. “He nailed it with respect to Trump’s victory and its effect on bonds.”

In reality, Gundlach was a little lucky in relation to his Trump prediction. “Hillary is going to lose badly,” he said in January. “The populist momentum is unstoppable. If Trump wins the nomination, he will own her in the debates.” In March, he predicted there would be a “global growth scare” before summer had ended as markets began to get nervous about the prospect of a Trump win.

However, Clinton didn’t “lose badly”; far from being the victim of “unstoppable” populist momentum”, she is likely to end up winning the popular vote by more than two million votes. Trump did not “own her” in the debates” – his election odds dived following his debate performances. As for a Trump-induced global growth scare, it didn’t happen.

These details aren’t referred to in the myriad pieces applauding Gundlach for his crystal-ball gazing. Nor are all the other big predictions he made in 2016, few of which have come to pass.

Asked about the possibility of Brexit in April, he said it was “not going to happen. People like to complain, they like to say what’s wrong but then when it comes down to actually pulling the lever they sit there and they say, ‘what exactly am I doing here, what is going to happen?’ The devil you know is better than the devil you don’t know.”

“Look at what happened with Scotland. People aren’t going to pull a lever for Brexit, so I don’t even think that’s worth considering in the present time.”

On February 8th, days before US markets bottomed following weeks of panic regarding the health of the Chinese economy, he warned against bargain hunting, saying the market “is a freight train that you want to stay in sync with”. Weeks later, Gundlach said he had actually bought at the bottom but that he remained bearish.

In March, he said there had been an “easy rally” in risk assets but that stocks now had just 2 per cent upside and 20 per cent downside; equities continued to head higher over the coming months.

Gundlach was especially forthright in late July, saying: “The artist Christopher Wool has a word painting, ‘Sell the house, sell the car, sell the kids.’ That’s exactly how I feel – sell everything.” Months of historically low volatility were to follow. Less than a week before the US presidential election, he warned that stocks faced a 5-10 per cent drop, saying: “The dam is breaking, you can feel it.”

Gundlach’s older market forecasts reveal a similarly erratic forecasting record. In 2011, he said he had the “gift” of “being able to have stunning insight into the reality of markets and the economy”.

In late 2012, he was wary of equities, saying he was “waiting for something to go kaboom”; instead, the S&P 500 rose 32 per cent in 2013. “About everything that tends to characterise the vicinity of a top in the equity market seems to be in place,” he said in January 2014; instead, stocks gained another 14 per cent.

Gundlach’s ill-fated forecasts, whether made in 2011 or in 2016, are rarely referred to, unlike his more successful predictions. In June, a Reuters piece said that, in 2015, Gundlach “correctly predicted that oil prices would plunge, junk bonds would live up to their name and China’s slowing economy would pressure emerging markets. In 2014, he forecast US Treasury yields would fall, not rise as many others had expected.” These “prescient investment calls” have “earned him a reputation as a savvy investor.”

Reuters, which regularly interviews Gundlach regarding his market outlook, has repeated the above lines on countless occasions this year. Other publications invariably describe him in the same manner, citing the same examples; to quote CNBC, he is “known for his bold, prescient predictions”. As for the not-so-prescient predictions – hey, who cares?

Gundlach is a skilled and supremely self-confident money manager who has had an enormously successful career. Accordingly, when outlets selectively list past forecasts and then go on to report his next big market call, some investors are liable to follow in his footsteps and throw their own asset allocation plan out the window.

In an ideal world, the media would keep score and forecasters would routinely be held accountable. That way, amateur investors would begin to appreciate the random nature of short-term market forecasting, and why it is, as Warren Buffett once put it, little more than “poison” that should be “kept locked up in a safe place, away from children and also from grown-ups who behave in the market like children”.

This rarely happens, however. The apocalyptic forecasts of Marc “Dr Doom” Faber, for example, receive much media attention, and are often accompanied with a few lines about how he predicted both the 1987 crash and the global financial crisis. The thing is, scarcely a year passes without Faber warning of an imminent 1987-style crash; the old adage about a stopped clock being right twice a day applies.

Sometimes, forecasters are held accountable for wrong predictions. Ironically, these criticisms are often misplaced. The reputation of polling expert Nate Silver has taken a hit for his failure to predict a Donald Trump presidential victory, even though Silver’s statistical models indicated Trump had a real chance of winning the Electoral College while losing the popular vote.

Other pundits who predicted a Trump victory have been lauded as Nostradamus-like visionaries, even if their predictions were only half-right (to repeat, Trump is likely to lose the popular vote by a few million votes) or based on little more than a hunch.

It may be naïve to expect the financial media to dwell on these nuances, given its failure to engage in the most basic form of score-keeping in most instances. To return to the case of Jeffrey Gundlach, Fortune magazine reported that this “was the 12th election in a row since 1972 that Gundlach has called in advance”, repeating a claim he had made to Reuters in the aftermath of Trump’s victory.

Belfast Harbour seeks to develop six new film and television studios 00:01
Irish economy to grow by 3.4% this year, predicts EY 00:09
Your business week: all the results, indicators and meetings 18:00
Should AIB compensate me for upsetting letter on arrears? 16:00
Chris Johns: The Johnson administration will spend, and needs a quiet Treasury 15:01

1 Should AIB compensate me for upsetting letter on arrears?
2 Chris Johns: The Johnson administration will spend, and needs a quiet Treasury
3 Poll on second election, concerns over Irish pension gap, and Ireland’s rich list
4 Tax shifts won’t drive multinationals out of Ireland - Moody’s
5 How to turn racists’ genetic arguments against them
6 Clean energy’s dirty little secret on wind turbines
7 ‘Germans are very efficient and reliable. Cancelling is alien to them’
8 Virgin Media Ireland loses 7,100 subscriptions in fourth quarter
9 Maeve Culloty: ‘My energy comes from the challenge’
10 Nine alternatives to putting your money on deposit
Real news has value SUBSCRIBE
Save money on international transfers