Does Gweedore deserve a higher state pension than Glenageary? 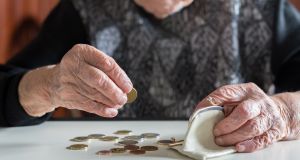 Instead of all pensioners getting the same payments, and the same increases on budget day, Minister Regina Doherty said, she could see a situation whereby a ‘lady in Donegal’ might get more or less than a ‘lady somewhere else’

If there’s one certainty you can expect to hear when you visit your local friendly pension adviser, it’s not to depend on the State pension and to provide for your retirement yourself.

Now Regina Doherty, Minister for Employment Affairs and Social Protection, has upped the ante on the viability issue by declaring last week that it isn’t “fair” that some people are getting full State pensions which they may not need, while others on the same amount live in poverty.

Instead of all pensioners getting the same payments, and the same increases come budget time, Ms Doherty mooted that she could see a situation whereby a “lady in Donegal” might get more or less than a “lady somewhere else”.

But what does this actually mean?

Her comments come against a background of growing concern about the sustainability of the current State pension regime. While Government made a move some years ago to relieve the pressure by pushing up the State pension age, many would argue that it simply isn’t enough to make the weekly €248 payment – which was deemed “comparatively generous” by the Melbourne Mercer Global Pensions Index last year – affordable to the State.

And it’s a welfare payment that, regardless of the economic climate, has continued to grow. Despite the age of austerity, the State pension did not waver. Paid at a rate of €209.30 back in 2007, some 12 years on the payment has jumped by 18.5 per cent. At the same time, inflation rose by just 8.2 per cent over the period.

Some of the affordability concerns are down to how we fund the State pension. Ireland operates a “pay as you go” approach, which means that those now receiving pension payments are being funded by the PRSI contributions of those currently working. This works at the moment, because we have five workers contributing for every pensioner taking money out. Fast forward to 2050, however, and this will have shrunk to two workers. So something obviously needs to be done.

One potential interpretation of Ms Doherty’s comments is that the State pension could be means-tested. While those who get the non-contributory pension must satisfy a means test, receiving the full State pension is currently dependent on how many PRSI contributions you’ve made over your working life.

But changing this relationship could reap rewards for the exchequer.

Indeed a report by the Society of Actuaries in 2016 found that a move to a means-tested system would “significantly reduce pension expenditures”. Limiting the State pension to those earning less than €100,000, for example, would have an immediate benefit, cutting the proportion of GDP required to fund the State pension from 6.2 per cent by 2025 to 5.9 per cent.

Similarly, the OECD review of Ireland’s pension system back in 2014 suggested a basic flat-rate of pension for all retirees – set at a “modest level” – with a means-tested top-up for those with no other income, or those living alone. It also posited a single means-tested pension, financed out of taxes.

But there are two major problems with such an approach. Firstly, for a certain cohort, the State pension is already costing them more, because they are paying more in PRSI contributions. Back in 2011, for example, the Government removed the PRSI cap on income above €75,000, which means that these workers have higher PRSI bills every year.

And secondly, the problem with introducing a means test is the potential impact on behaviour. After all, why sign up to any new auto-enrolment regime – whenever it materialises – and hand over €100 or €200 every month – when this might preclude you from receiving a benefit you could otherwise have got for free?

Now however, it seems that the Government wants this to end. But how will it do this?

Well, earlier this year, Ms Doherty suggested linking pension increases to the consumer price index. But given her more recent comments, could we see a situation where pension increases are dependent not just on national price trends but on local ones?

So the aforementioned lady in Donegal, for example, who may be living alone, and may not have access to public transport, which means she needs to pay for petrol rather than use her free-travel card to get from A to B, could be entitled to a greater increase than a couple living along the Dart line in Glenageary. Or maybe the couple in Glenageary will be entitled to more, given a sharper increase in price pressures in their area.

As Ms Doherty herself said, it will be administratively onerous, and will take a few budget cycles to bed this new approach down. But we should get some clues this coming budget day on October 9th.

1 In this strangest of recessions, what happens next for Ireland?
2 Michael O’Leary is the boss you want to lead an airline out of crisis
3 Bank of Ireland sees about 2,000 staff apply for voluntary redundancy
4 Irish company to test vaccines on volunteers deliberately infected with Covid-19
5 High Court told FBD staff texts discussed policies in ‘disparaging terms’
6 Air travel never going ‘back to way it was’
7 How to . . . move (almost) everything to your new phone
8 Estée Lauder staff at Dublin airport plan further strike action
9 Ireland’s Covid-19 economy in five graphs
10 Fortnite owner signs multimillion deal to buy Irish ‘kidtech’ firm
Real news has value SUBSCRIBE
Save money on international transfers