Not feeling the economic recovery? You’re not alone

The financial outlook for many is dominated by stagnating wages, high personal debt and persistent negative equity 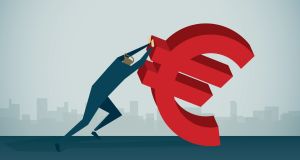 For many, “the idea that the economy is running too hot seems entirely alien”. Photograph: iStock

Ireland may well be the fastest-growing economy in Europe this year, but for many Irish consumers, this has yet to have a meaningful impact. Meanwhile, risks to the nascent recovery remain.

“On macro terms, there is unambiguously a very strong recovery and we see that very clearly in the jobs market,” says Austin Hughes, chief economist with KBC Bank Ireland.

However, falling unemployment and soaring GDP means something different for many Irish consumers who have yet to fully benefit from the recovery. Talk of the economy overheating will come as a surprise to them, given their personal financial circumstances.

“They’re just trying to keep their head above water, and the idea that the economy is running too hot seems entirely alien,” says Hughes.

The convention was that when an economy is improving, everyone gets a share and everyone will be better off. It is now much more varied

GDP growth may once have been the rising tide that lifted all boats, but with the State’s dependence on multinationals, consumer sentiment appears to have bifurcated somewhat from GDP growth. The bottom line is that only some people, in certain jobs, and certain sectors, in certain parts of the State, are benefiting from the recovery.

“The convention was that when an economy is improving, everyone gets a share and everyone will be better off,” says Hughes. “It is now much more varied, and any increases are moderate.”

So here are some reasons why you may not be feeling the recovery; and some others that illustrate why the recovery is still uncertain.

“It’s a little bit like the Irish summer; you have two or three wonderful days in the sun and you’re planning to lie out in the back garden for the next months, and of course then the umbrellas need to come out,” says Hughes.

It has been described as a “lost decade” of earnings growth in the UK, and it’s set to continue. The Institute for Fiscal Studies think tank has indicated that incomes in the UK will be no higher in 2022 than in 2007, on the back of welfare cuts and weak earnings growth.

In the US, such is the recent disconnect between inflation and falling unemployment that some have questioned whether the Philips Curve, which shows the relationship between unemployment and inflation, has collapsed.

Here in Ireland, the picture is not so different.

While Hughes adds that it’s hard to be too definitive about these earnings figures, noting that alternative figures for employee compensation from the national accounts show a “much stronger (if somewhat erratic) trend”, overall the general trend is the same.

“What is very clear is that there isn’t a widespread marked improvement in earnings,” he says.

Alan McQuaid, an economist with Merrion Capital, agrees. “It’s a conundrum in general; it’s not unique to us, but given the strength of the economy and how well it’s performed, you would expect that earnings would start to rise.”

Against a background of wage pressures from the public sector as well as transport workers, why has earnings growth stagnated? In the UK the argument put forward has been that people need to change jobs to earn wage hikes but have been too scared to do so.

While official inflation figures are low, consumers are being hit by soaring increases in rent, car insurance and health insurance

Writing last year, Tom Healy, director of the Nevin Economic Research Institute, said that the reason may be down to younger, lower-paid workers, who are gradually replacing retiring, better-paid workers.

“I don’t think there’s any definitive reason why it’s happening,” says McQuaid. “You’d imagine that as the economy picks up, we would see some growth.”

A further complication is that while official inflation figures in Ireland are low, consumers are nonetheless being hit by soaring increases in key areas such as rent, car insurance and health insurance.

“[Official] inflation is too low, I think,” says McQuaid. “Consumers aren’t as well-off as we’re led to believe.”

But with official inflation figures so low, it gives companies an argument for ruling out pay increases.

This lack of inflation is also creating difficulties for people as the value of their debt is not being eroded due to inflation.

“People have a more enduring debt burden and they need to be cautious,” says Hughes.

Moreover, our debt-to-GDP ratio, which tracks a country’s debt to its income and offers a good measure of a country’s debt sustainability, has also reversed, down from a high of 125 per cent in 2013 to about 73 per cent by the end of last year – and as low as 45 per cent by the mid-2020s. In Greece, on the other hand, debt to GDP is of the order of 177 per cent – and is expected to rise even further.

It is because of measures such as the this that Ireland has become the poster boy of Europe.

However – and it’s a big however – the reason this metric has shrunk so dramatically is not because our debt has fallen so significantly: it’s because our GDP has risen so sharply. Thanks to so-called “leprechaun economics”, factors such as the transfer of intellectual property have flattered the actual level of economic activity.

Using modified gross national (GNI) – a new CSO measure designed to smooth out the impact of those volatile foreign direct investments – the picture is even less encouraging. As a percentage of GDP, Ireland’s debt may have stood at 73 per cent at the end of 2016 but this jumps to 106 per cent when expressed in GNI terms.

And when you consider the size of our debt in relation to the size of our population, it is massive. In fact, Ireland’s debt per capita, at $45,941, is the highest of any country in the euro zone – and the third highest in the world. In Greece on the other hand, the burden is just $31,797 per person.

The level of national debt we are still carrying brings significant risks. If and when interest rates start to rise again, the cost of servicing this debt – currently put at about €6.7 billion a year – could rise sharply, putting pressure on the exchequer; and if GDP growth stabilises or falls, our closely watched debt-to-GDP ratio will move out of whack.

It was a feature of the boom to bust. It took some time to materialise but is taking much longer to disappear. Today some 13 per cent of all mortgages are still underwater or in negative equity.

While that’s a substantial improvement on early 2013, when 40 per cent of all homeowners owed more than their property was worth, it’s still somewhat staggering. Across the State, 100,000 mortgages are still in negative equity.

According to latest figures, one in 10 mortgages on a main family home is still in arrears

Not only that, but 9 per cent of mortgages are greater than 110 per cent of the estimated value of the property, so someone in this group with a mortgage of €200,000, for example, will find that their house is still worth only about €180,000.

Another nugget from recently released data is that the exchequer remains heavily dependent on tax revenues from a select group of companies. Last year our total corporation tax take was some €7.4 billion. But, of this, some 40 per cent, or €2.96 billion, was paid by just 10 multinational companies.

For 2017 it has been estimated that this select group of multinationals could be responsible for 6 per cent of the State’s entire tax take.

Clearly the economy could be vulnerable should even one of these companies change their corporate strategy – either leaving Ireland altogether, or just changing how much of its profits get taxed here.

“We are exposed if a company decides to leave,” says McQuaid. “The problem is that we are highly dependent on FDI [foreign direct investment] and we don’t really have our own serious indigenous industry that we can plug into if things go awry.”

Against a prospect of US president Donald Trump succeeding in his goal to cleave US corporate taxes, and the UK’s departure from the European Union, which could allow it to follow a more attractive tax regime, it’s just one more reason why people are wary of buying into the recovery story.