Bank gets its maths wrong on parental gift towards house

My girlfriend’s dad wants to give her €35,000 towards a house but the bank says tax is due 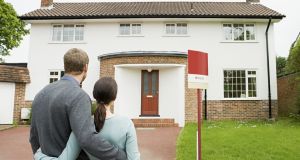 It’s difficult enough to get on the housing ladder these days without lenders putting unnecessary barriers in the way. Photograph: iStock

My girlfriend and I are looking to buy a house. Her father would like to give her a gift of €35,000 towards it. The bank has told us that, because we are not married, this gift is subject to capital acquisitions tax because it is above the threshold of €16,750. Is this correct?

It’s difficult enough to get on the housing ladder these days without lenders putting unnecessary barriers in the way.

The bank is doing one of three things here. Either it is misunderstanding what your girlfriend’s father is doing or it is confused in its interpretation of the gift tax code. Either way, it is incorrect.

The only other explanation is that it is deliberately looking to lower the amount it is prepared to lend you and is using this gift as a device to muddy the financial waters by suggesting it is a gift to you both.

Your girlfriend’s father wants to gift her €35,000 to help her acquire this house. That is a matter for him and her. In law, it has nothing to do with you – or the bank. The only issue for the bank is what repayment capacity you and your girlfriend have between you, within the rules laid down by the Central Bank.

Frankly, I am not sure why you even volunteered the information to the bank. It is none of their business. If they had seen – as they would – the sudden arrival of such a sum in her account, they could then have asked about its source.

But it is still a perfectly legitimate way to help a child build a deposit, and there is no reason for the bank to be suspicious about it or to suggest its full value cannot be used as a deposit.

For clarity, your girlfriend’s father can gift her up to €310,000 if he chose to without tax becoming the issue. Unless she has previously received a major cash gift or inheritance from her parents, she has loads of headroom on this gift before tax becomes an issue.

Now, it would be different if he was gifting you but even then the bank’s sums are wrong.

As a “stranger” – not a blood relative – you can only receive gifts up to the value of €16,250 over your lifetime from other “strangers”, including your girlfriend’s father. For what it’s worth, this situation, and threshold, doesn’t change even if you were to marry his daughter; you would still be a “stranger” to him under capital acquisitions tax rules.

Having said this is all you can receive, I should add that you can also avail of a smaller cash gift under what is known as the small gift exemption – up to €3,000 in any year. Your girlfriend’s father can make such a gift to her, to you – and to anyone else if he wanted to – without any impact on lifetime gift tax thresholds.

The bottom line is, there is no tax due on this gift. Even if the father was giving it to you both, your portion – €17,500 – would still be below the €16,250 lifetime threshold when you take the first €3,000 out of it under the small gift exemption. Go back and tell the bank to forget about the gift. In tax terms, it’s irrelevant.

1 Pilita Clark: Managing ‘meeting monsters’ to get work done
2 Chris Johns: Economies may enjoy ‘roaring twenties’
3 Arcadia on the brink of becoming biggest retail casualty of pandemic
4 Covid-19 weighs on law firms as two in three see revenue drop
5 NDRC confirms tender loss as it gains €3.1m from LearnUpon exit
6 Irish early-stage start-ups suffering funding crisis
7 Basic income for all: Has the Covid crisis given us a new economic model?
8 ‘They’re not making any more land, so it will be valuable’
9 Hospitality sector may take four years to recover - Supermac’s
10 Profits jump threefold at LinkedIn’s Irish unit to $294.2m
Real news has value SUBSCRIBE
Save money on international transfers