Coming home from the Middle East and making a will 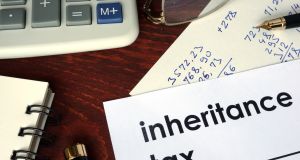 You’d want a pretty sharp tax adviser to try to persuade Revenue you were anything other than Irish-domiciled.

I’m an Irish national and have been living and working in the Middle East for over 10 years. I am currently non-resident and not ordinarily domiciled in Ireland. My wife is a not domiciled in the State. We are planning at some stage to return to Ireland in the next couple of years.

My children were born in the Middle East and have Irish passports. I have a property in Ireland and also hold a savings account (outside of Ireland).

I had made a last will and testament some time back with my wife as the sole beneficiary. I understand that the threshold for tax in the State is €310,000 (after which the amounts are subject to tax).

1. Does this apply to a foreign-national – ie my spouse – if she:

i) was in the State;

ii) remained outside the State ?

2. Is there any relevant wording for a will and testament that would highlight that amounts over the €310,000 could be split between by children?

3. Is there anything else I should be aware of when revising a last will and testament ?

Well, there are all sorts of issues thrown up by this, aren’t there?

Getting the “easy” one out of the way first, there is no such concept as “ordinary domicile” in tax law. You are either Irish-domiciled or you are not. And the fact that you are living abroad and have been for some time does not determine of itself what your domicile is.

In your case, I am strongly of the view that you are Irish-domiciled. You are Irish-born and an Irish citizen, you have property in Ireland, you have chosen to get Irish passports for your children and you plan to return here in the medium term on a permanent basis. You’d want a pretty sharp tax adviser to try to persuade Revenue you were anything other than Irish-domiciled.

Your wife’s case, of course, is different. You give very little information but it does appear as though she may be foreign-domiciled.

In any case, it looks like we would be talking about a position where your will would be managed under Irish law, so what does that mean for the various issues you raise?

First – and most importantly – there is no threshold on what you can leave your wife free of tax. It is open to you to leave your entire estate to your wife, assuming you predecease her, without either of you having a penny of tax to consider.

So in answer to question 1, there is no threshold on what you can give your wife, whether she is resident in the State or not. And it is common practice in Ireland that spouses bequeath their entire estate to their surviving partner, with children and others benefiting only after the death of the second spouse and under the terms of their will.

The €310,000 threshold to which you refer is the category-A threshold governing inheritances (and large gifts during your lifetime) to your children.

It is their threshold but it is cumulative. So they will need to add up any large gifts (in excess of €3,000 in any tax year) or inheritance from either parent. When they get to 80 per cent of the threshold, they must notify Revenue; when they exceed the threshold, they are subject to capital acquisitions tax on any further large gift or inheritance from either parent at 33 per cent.

This threshold does change. It was as high as €542,544 in the Celtic Tiger years and subsequently fell to as low as €225,000. The current government has a policy in place to increase the category A threshold to €500,000 over time. It remains to see whether they get that time or whether some other government coalition comes into play.

If you are minded to pass on inheritance to the children up to but not over the capital acquisitions tax threshold, you can as long as you make sufficient provision for your wife (see below), but you would need to talk to a lawyer about any specific wording that would take account of changing threshold levels. In general, a specific figure matching the current threshold is inserted but this means amending your will, if you chose, should thresholds move.

You should be aware fathering underlying rights of your family to provision in any will you draw up.

We have spoken about the ability to pass everything on to your wife, tax-free, but the flip side is not the case. You cannot choose to leave a wife out of a will under Irish law.

They have automatic right under the Succession Act to one half of your estate if there are no children, and one-third where there are children.

Ironically, in terms of the children, they have no guarantee of benefit under a will whereas they do if you die intestate – without making a will – they get a minimum of one-third of the estate. If there is no surviving spouse, they share the entire estate if there is no will.

Of course, if they are left out of a will, it is open to them to challenge the will if they can argue that the dead parent failed in their “moral duty to make proper provision for the child in accordance with his means”.